194. All the Colours of Darkness 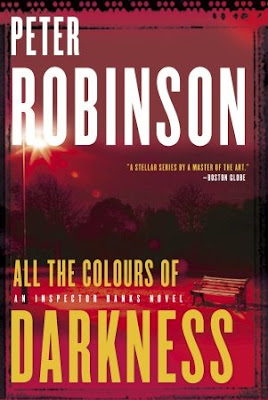 All the Colours of Darkness by Peter Robinson
An Inspector Banks Mystery, Book 18

Detective Inspector Annie Cabbot thought it was a great shame that she had to spend one of the most beautiful days of the year so far at a crime scene, especially a hanging.

Comments: Two men are found dead, one brutally beaten in his apartment and the other hanging from a tree in a local park. It appears to have been a lover's spat turned into a murder/suicide but once it is found out that one of the dead men was a secret agent with MI6 things start to seem more complicated than at first presumed.

I enjoyed this book but can't say that it is up to par with the other Inspector Banks novels I've read to date. I enjoyed the whodunit and the author digs deep into Banks' psyche making him one of my favourite detectives. What I found (shall I say) boring was all the secret agent/spy stuff. MI5 this, MI6 that, just doesn't do it for me. I like my mysteries to be crimes and thrillers not spy novels. While I enjoy an Ian Fleming as much as the next fellow, I didn't expect this book to be so dependent on the spy aspects for the plot.

The ending was a surprise, rather bleak, certainly not a happy ending. Inspector Banks' private life is a main feature of this novel and I enjoyed that aspect very much and once again it also was left with a bleak uncertainty, leaving one curious as to where his personal life will go in the next novel. Fans of the series will find enjoyment meeting up with favourite characters again but if you are new to the series do not start with this one as it is not representational of the series as a whole.
Labels: mystery