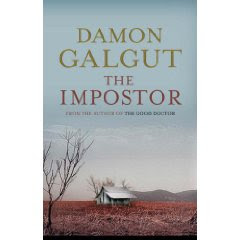 The Impostor by Damon Galgut

The journey was almost over; they were nearly at their destination.

Comments: Adam Napier lives in South Africa just after the abolition of Apartheid. He has always been against Apartheid and now ironically he has lost his job to make way for race equality in the work place, losing his job to the black man he had been training. One time poet, he decides it is time to start writing again and he moves out to the Karoo, the empty countryside where he lives in a rundown shack of a house that his brother had once bought with the idea of fixing it up as a summer home. After only a few days he meets a man who once was a school chum of his as a boy, the man says he has always been his hero, but Adam cannot for the life of him remember him at all. He plays along and eventually starts going to the man's ranch to visit him and his wife on the weekends. Many more things happen, but then I would be giving away too much to say just what.

This is a very difficult book to describe. It is the story of friendship and betrayal, of nature vs. man, of race relations and finding out just how far one will go to get what they want. The book starts off very slowly and really feels to be about nothing at all, at first. But by the second page I knew I was going to enjoy the book, I just wondered what it was going to be about and often found myself wondering that as the book progressed. The title. The Impostor, comes into play many times, and once one realizes what 'impostor' implies one is later again shown a different 'impostor' and it evolves throughout the book.

This is not the book for you if you want non stop action or a plot driven book. The book is more a character driven story where the characters are more important than what is happening. This is one of those books you read and think you like, then wonder if you really do, but in the end the story grew on me and I think the characters will stay in mind for some time. This book has definitely made me interested in reading some of the author's other work. Perhaps I'll next read The Good Doctor which was a finalist for the Man Booker Prize.
Labels: realistic fiction