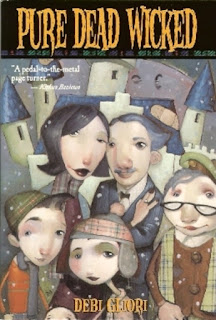 Much later, Titus was to remark that this must have been the only time in history when a dirty diaper could be said to have saved several lives.

Comments: The second entry in this series is just as good as the first (see my review here).

The Strega-Borgia's castle is in need of roof repairs and they head off to a hotel while it is being fixed. Little do they know that the building contractor is in cahoots with a real estate developer who wants the property for himself.

The Scottish humour is hilarious. The author puts a capital G on the word "Gross", but in such a funny way you don't mind being grossed-out. My favourite characters are the nanny, Mrs. McLachlan, a witch, and Tarantella, a lipstick-wearing spider who lives in the attic. The whole family is endearing, including the servants and the mythical beasts who live in the dungeon (a dragon, a yeti and a griffin). I'll certainly be reading the next book in the series and I'd recommend this to anyone who finds the idea of a Scottish Addams family appealing.
Labels: children's books fantasy gothic