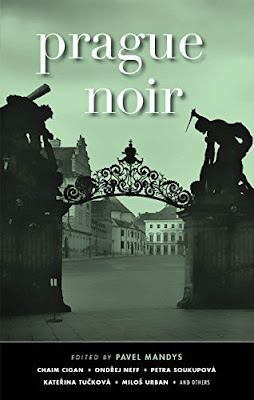 Prague Noir edited by Pavel Mandys
My rating: 4 of 5 stars


Part of Akashic's "Noir" series of short story collections, this is probably the best overall book in the series I've read. These are all modern day writers who, I think are commissioned for inclusion in the collection. A wide variety of crime stories that fall under the sub-genre of noir. All taking place in Prague, Czech Republic, I found most of the stories to be excellent and only a few which didn't satisfy me bringing the average rating to a laudable 4/5.

1 - Three Musketeers by Martin Goffa - A man arranges to meet another man in a desolate place. There they begin a conversation in which we learn what the one man's grievance is with the other. Something from the past. A suspenseful story which slowly reveals itself to you, keeping just one step ahead of me. Excellent start to the collection! (5/5)

2 - Amateurs by Stepan Kopriva - Some thieves are about to rob a grow-op run by the Vietnamese mafia, as all such are these days in Prague. They've got an inside man and today is the day. But not everyone is who they seem to be. Very short but manages an intricate plot. Really liked this! (5/5)

3 - Disappearances on the Bridge by Milos Urban - A tech gives a seminar to a police force about new technology on the border crossing bridge. At some point they notice a woman in a red hood appears to simply disappear, none of the police will take action but the tech must figure out what has happened. Soon he appears on the screens and he too disappears, so an officer goes to investigate and we find out the strange goings on. Really good! and a fun ending. (5/5)

4 - The Dead Girl from a Haunted House by Jiri W. Prochazka - Loved this one! Somewhat of a standard murder/detective story but made unique by its setting set behind the scenes of a carnival. I just love circus themed stories so I was particularly enchanted with this. An ex-cop PI is hired by the owner of a gypsy carnival troupe because his daughter was brutally murdered. The PI comes in, investigates a bit then gathers the group and exposes the killer. Good characterization. (5/5)

5. The Magical Amulet by Chaim Cigan - Not a particularly interesting story and as far as I can tell there is nothing "noir" about it. Taking place is Soviet Czechoslovakia, a Jewish family's good luck charm is the topic of conversation as well as the boy narrator's discussions of WWII with a Polich Jew. (3/5)

6. Marl Circle by Ondrej Neff - It was hard o concentrate on this story I didn't much like it. The story goes into some Czech history and centres around possible paranormal activity. The story even concludes with an "Author's Note" explaining the true history and renovations going on of the archaeological site which is the setting of the story. (2/5)

7. The Cabinet of Seven Pierced Books by Petr Stancik - This takes place in the mid-1800s in the Ghetto where not only the poorest of the poor live, but also all the outsiders such as astrologers, psychics, etc. A death occurs there and they find out he was a fortune teller who has been murdered. The detective works the case meanwhile a second fortune teller is murdered and then a third who managed to leave a clue as to his killer. A bit weird but ok. (3/5)

8. The Life and Works of Baroness Mautnic by Katerina Tuckova - At first this tale seems only to be that of a house. It's history through 20th century Czech Republic, though not always called that. The wealthy owner, then his family go through the country becoming socialist, then communist, then invaded by the USSR and finally it's liberation as a republic once more. It's not until the very end that the current poverty-stricken owner of the house discovers its wicked little secret which saves her from destitution. Loved it! (4/5)

9. All the Old Disguises by Marketa Pilatova - Hmmm. Rather longwinded. A grandson brings his grandfather's "partner" to Prague for nefarious reasons. He wants the man's cooperation in signing documents which will give him restitution for buildings stolen by the former Soviet government. It doesn't turn out as expected though. (3/5)

10. Percy Thrillington by Michal Sykora - A standard police mystery. While visiting the narrator's friend, a retired cop, said cop shows an old McCartney album and then starts into the story of how that LP helped him to solve his first murder case, an apparent suicide. Nothing fantastic, but a straight-forward old school murder mystery - (2/3)

11. Better Life by Michaela Klevisova - This had a surprise twist that got me. An antiques dealer notices a woman continually watching him and slyly taking pictures so thinks she's an undercover detective. Then he begins to wonder if she is a stalker after she's spoken to him, and perhaps has taken a fancy to him. When he finds out just what she was up to it comes as a terrifying shock. (4/5)

12. Another Worst Day by Petra Soukupova - A woman reports her husband missing when he doesn't return from a jog. The next several days follow the investigation and then weeks and months go by and Radka realises she is following a new routine. The story comes from the point of view of the detective assigned to the case. An interesting mystery. (4/5)

13. Olda No. 3 by Irena Hejdova - This is an odd little story and rather macabre. Just how I like 'em! A woman wakes up with a stranger in her bed, finds out his name is Olda, the same as her ex so she starts referring to him as Olda No.2. That morning she takes the dog for a walk and he brings her, of all things, a severed pinkie finger with a wedding ring on it Turns out Olda No. 2 is a cop, a traffic cop but still a cop, and they search for the owner of the finger. (5/5)

14. Epiphany, or Whatever You Wish by Petr Sabach - This is a really good story but with a rather weird and unsatisfactory ending. A man decides to commit suicide because he is having murderess thoughts. The main thing that drives his character is that he never disturb anyone else. So he spends time deciding on how to kill himself without inconveniencing anyone. Things do come to a fruition but not exactly as he had planned. Good execution except, as I said, the end. (3/5)