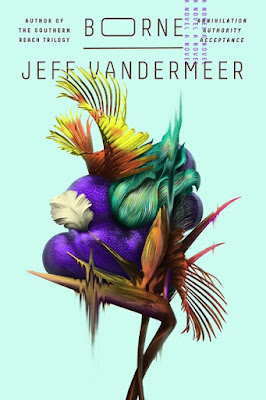 Borne by Jeff VanderMeer
My rating: 5 of 5 stars


Absolutely fantastic! Set in a post-apocalyptic world, our main character is a scavenger. It's a strange world and whether this is earth can only be pondered by the reader. The Company dealt with bioengineering and is one faction of the city. Defences at the ready but otherwise seemingly abandoned. The Magician is a mysterious figure working against the Company. Meanwhile, the city is terrorized by a piece of bio-engineering that has turned against the Company, a giant (Godzilla-sized) bear. It is in this world that Rachel the scavenger finds a small biological piece that she takes for a plant, that is until it starts to move around and talk. Borne is a fantastic creature and the whole story is science fiction bordering on The Weird. As soon as I had finished this I wanted more, so I've now downloaded VanderMeer's Annihilation to my kindle and am caught up in it. A new author discovered for me!