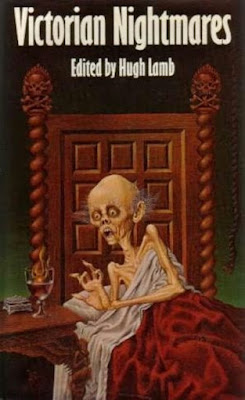 Victorian Nightmares edited by Hugh Lamb
My rating: 3 of 5 stars


Hugh Lamb's third anthology of Victorian tales of the macabre. He's picked stories and authors mostly overlooked by the anthologists of the day thus presenting a fresh collection. I believe they were all first reads for me. Lamb is my kind of editor; each story begins with an introduction to the author and where the story comes from with some background information. As is usual in an anthology some stories were better than others but the book as a whole averaged out to a solid 3/5 rating.

1. The Devil of the Marsh by H.B. Marriott-Watson (1893) - A moody atmosphere is the best feature of this short tale. A man, besotten by a creature of the marsh, meets her there and learns the true horror of her nature. OK but rather dull. (3/5)

2. A Tragic Honeymoon by G.R. Sims (1894) - Loved this one! A creepy tale of a newlywed couple spending their first night together only to find blood dripping from the ceiling and landing on the lady's hand. There has been a suicide and the strange details come to light by the end. (4/5)

3. The Battle of the Monsters by Morgan Robertson (1899) - A weird tale that was a bit ahead of its times. Tells the story of a sole black cholera cell travelling through a body as a battle is going on against influenza. Rather like "The Fantastic Voyage", only the cholera is the narrator of the story. Ends up feeling somewhat science lesson-y but has a nifty vicious ending(3/5)

4. The Return by R. Murray Gilchrist (1894) - Quite a short story and a very predictable plot that does manage to shock at the end. A man returns to his lover 20-years after promising to return when he had made the money she deserved. (2/5)

6. The Ship that Saw a Ghost by Frank Norris (1903) - a Straightforward tale of a ghost ship. Nothing happens but well written (2/5)

7. A Bottomless Grave and One Summer Night by Ambrose Bierce (?) - The first story is macabre humour with biting whit aimed at the current state of affairs. It's a silly story but certainly, nightmarish. The second is a mere page and a half long retelling the events one evening of some grave robbers who chose to exhume a corpse who didn't believe he was dead. I like Ambrose Bierce a lot but these are two mediocre examples of his work. (3/5)

8. Ghosts That Have Haunted Me by J.K. Bangs (1898) - At this point, the editor interjects to let the reader know that the next three stories are humorous rather than terrifying. This story certainly fits the bill. The complete piece is written with wit calling sarcasm to every bit of current daily life. Then the narrator goes on to tell how he deals with ghosts, of which he is not frightened, but in the end how one did bamboozle him. (4/5)

9. Haunted by Spirits by George Manville Fenn (1867) - A man spends the night in a supposed haunted room. Any humour was lost on me and frankly, I found it boring (1/5)

10 A Ghost Slayer by J Keighley Snowden (1893) - Not exactly funny, but light-hearted. A man in town can see ghosts, foretell the future and even claims to have actually killed a bothersome spirit. (2/5)

11. The Tomb by Guy de Maupassant (1884) - A very short tale of madness written by the tremendous author of Victorian Gothic. A man is on trial for digging up the corpse of his beloved. His statement to the jury follows. (5/5)

12. The Man with the Nose by Rhoda Broughton (1879) - A bit longer than the other stories in this book but a very fast read. A well-written tale of a couple on honeymoon in Germany. The woman sees a man with an unusual nose in their room one night, chalked it up to be a nightmare. However, the man is glimpsed in daylight and then makes his strike when the husband has to go home for a bit for the death of his benefactor. (5/5)

13. My Nightmare by Dorothea Gerard (1892) - A Lancer recounts the story of the Colonel's servant disappearing and the subsequent finding of him in an abandoned stone cellar. The setting gives this one its atmosphere. (4/5)

14. A Life-Watch by Georgina C. Clark (?) - One of the best stories so far. A young couple rent to a lodger, an old eccentric woman. For many years she lives there and her only possession is a large, heavy box which the couple wonders is full of either riches or books.Upon the lodger's death, she gives the lady of the house a letter explaining everything. A good building of excitement until the story finishes with a surprising twist ending.(5/5)

15. The Haunted Chair by Richard Marsh (1902) - Several members of the "Club" each encounter a former member who suddenly disappears as do their valuables While all this time said thief is supposed to be in Ceylon, starting a new life. This all happens in the smoking room where the "ghost's" chair is located. Well-written, with rising tension to the reveal and shock ending. Another of the best stories here. (5/5)

16. Coolies by W. Carlton Dawe (1895) - This story does not belong here, imo, as it is about a mutiny and hardly nightmare inducing. From the title one can tell from the get-go that this 19h century story is going be called racist by 21st century standards. However, I personally always judge books from the time in which they were written never imposing 21st-century values upon them. This said the story was hard to read through what is clearly a racist narrative even of the times. The words used to refer to the Chinese didn't bother me so much as that then each time the derogatory terms were accompanied by various demeaning adjectives. This made the story a chore to read and the plot is simply of a mutiny that got dangerous but was eventually overturned by those in charge. (2/5)

17. The Three Souls by Erckmann-Chatrian (1859) - It's 1815 and a student of philosophy talks with a metaphysics student. The discussion, the soul or the various numbers of souls to be exact. Our narrator is taken by the metaphysical theorist to come see his experiment in which he has proven the existence of three souls in a human: plant, animal and human. Setting eyes on the experiment our narrator is horrified and quickly becomes an experiment himself. Though faulty by today's theories, it was fun reading a mid-19th-century discourse on the scientific evidence of the soul. I'm a theologian myself and discussion of the soul, no matter how mad, is always interesting The story is quite Poe-ish and more nightmare inducing than others here. (5/5)

18. A Strange Goldfield by Guy Bootthby (1904) - A ghostly story by an Australian set in the Australian Outback. Three men are crossing the desert when they come upon an abandoned goldfield town which none had known was there. The guide hazards his best guess as to its name. They have a quick look about finding a skeleton in the saloon and quickly leave. Camping nearby they see a wild man running around who they manage to capture and invite to their camp. This is when the experience turns otherworldly. An enjoyable story. It evoked a creepy atmosphere while only hinting at the possible ghostly goings-on. (4/5)

19. An Alpine Divorce by Robert Barr (1893) - This uses a typical device for when a husband or wife (or both!) are considering killing the other. But in 1893 Barr may have been the first to use it. A well-paced story with a mean plot twist at the end (4/5)

20. The Story of Baelbrow by E. and H. Heron (1916) - A bit of a wierd one. Flaxman Low, a detective in the paranormal, is called in to look at a haunted house in which the benign ghost has become vicious resulting in one death. certainly well written but with a decidedly awkward explanation of just what has been causing the deathly rampage. (4/5)