4. Dancing Girls and Other Stories by Margaret Atwood 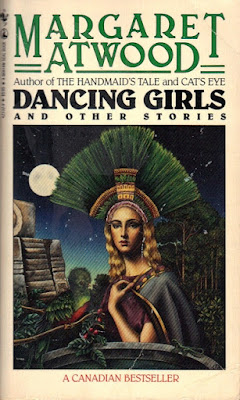 Dancing Girls and Other Stories by Margaret Atwood
My rating: 3 of 5 stars


Quite a good collection of 1970s Atwood. A couple of excellent stories and the rest are, for the most part, refreshingly free from Atwood's militant feminism. Overall good read.

1. The War in the Bathroom - Fantastic start to this collection! A woman moves to a new boarding house and the old man who coughs up a lung every morning in the bathroom next to her room annoys her. This is the premise but not what the story is about. The book is written from a very strange point of view which had me weirded out at first, then I made a guess, then another and I'm pretty sure whose pov we are getting. A nice sudden twist ending left me shaking my head in sinister delight. (4/5)

2. The Man from Mars - I vaguely have an idea as to what the title refers to in this story. It's a fairly sedate story; character centred. A university girl who is very tall and large has always been thought of as one of the boys and never had any attention from a man nor has she really wanted it. But then one day she meets a stranger "from another culture" who starts to follow her leading up to the point that he is stalking her, always there in the background and visible. This suddenly makes her interesting to her friends and the men start asking her out. The ending is interesting and I really enjoyed this quiet story. (4/5)

3. Polarities - A quiet man of solitude meets an efficient, organized woman at the university where they both work. At first, their relationship is friendly but brisk. Then Louise starts showing up at his place and talking about the current between the poles and completing the circle. She ends up in a mental institution. An engrossing read all about character with a confusing end. I liked it but didn't really understand it (3/5)

4. Under Glass - Atwood's usual feminist drivel. A woman moaning on about how badly done to she is by a man. (0/5)

5. The Grave of the Famous Poet - A couple goes to a small town where a famous author lived and was buried. They don't really have a lot of interests in common and by the end of the story, they know their relationship is over. Readable but not exciting. (3/5)

6. Rape Fantasies - At first, I didn't even want to read this one with a title like that. I remember back in the early 80s when this was a thing It was in all the magazines and talk shows, like Donahue. I even read a book full of rape fantasies when I was way too young to be reading such stuff. Anyway, this is indeed about the same thing. Women in an office lunchroom start talking about it and then the narrator goes off and tells us her rape fantasies which are more like "rapist" fantasies. She always manages to stop the man by connecting with him. The story is surprisingly humorous but it definitely makes a statement. Well-written in a conversational tone, I actually really enjoyed it. (4/5)

7. Hair Jewellery - A slow meandering story of a woman who reminisces about an old boyfriend, never a lover, who has haunted her rather mildly her whole life. She never really wanted him and she tells the story of their dating. But not even meeting him many years later at a conference, where they are both disappointed in what the other has become, removes him from the dusty shelf of her memory. Very readable but boring. (3/5)

8. When It Happens - A mature woman whose kids have flown the nest starts worrying about "it" which we can guess is the end of the world as we know it. Her husband notices a slight change in her behaviour and she imagines how it would happen. The line blurs between what is her imagination and what is real in this story. That makes it a bit disconcerting which actually is a great feeling to go along with this plot. My favourite so far. (5/5)

9. A Travel Piece - An interesting tale. A woman who wrights for the travel section of newspapers and occasional magazines is on her flight home. We listen to her thoughts as she thinks about how she must always be pleasant and look for the positive things on each of her travels This has made her feel like she isn't living a "real" life and has started to wish she did Then she is thrown into a real-life situation when her plane crashes into the middle of the ocean. Mostly a character piece and I really enjoyed it. (4/5)

10. The Resplendent Quetzal - An interesting piece about a husband and wife who have grown apart and lost communication.She daydreams that he has died somehow while he daydreams killing her. Switching back and forth from her to his point of view It is from the husband we first find out about the child. This now gives us a better insight into the characters. Good! (4/5)

11. Training - Beautiful! This is the best story in the collection. Concerns the inner turmoil of a young man being forced to go into the "family business", medicine. His grandfather and father were doctors/surgeons and both his older brothers are in med school. He is supposed to start pre-med this fall. But he can't stand it, the blood, the flesh, the cutting, the disease. This summer he has been sent off to be a counsellor at a camp for "crippled" children. Here he becomes attached to a non-communicative 9-year-old with cerebral palsy. His greatest terror is that one day he will go screaming mad. (5/5)

12. Lives of the Poets - Semi-autobiographical I'm sure.A woman gets a nose bleed a few hours before she's to give another reading from her poetry book.She reminisces on her life up to this point, her husband a painter, their marriage, living off government art grants, not being able to produce more work fast enough to make a living and one can't help but feel that the constant mention of blood symbolises the menstrual blood. Good writing. (4/5)

13. Dancing Girls - We finally come to the titular story. It's very good though not the best in the collection. A woman from Toronto is going to university in the US and lives in a boarding house. She has the only room with a kitchenette and shares a bath with the room next door. All tenants are students, mostly foreign. Now a new man comes to be her neighbour and she listens to his antics from the landlady. He does nothing, never leaves his room except to smoke and stare at the front doorway and is always borrowing the vacuum. He is no bother until the night he has a loud banging party with dancing girls. (4/5)

14. Giving Birth - Readable but I didn't really get the imagery. Simply a story about a woman giving birth. Certainly not a positive point of view but not necessarily negative either, more depressing with strange images. (3/5)