2. It by Stephen King 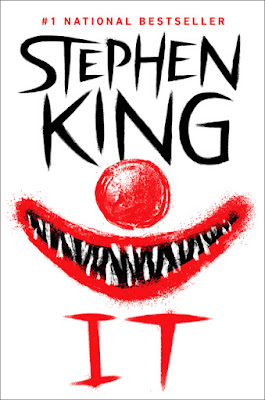 It by Stephen King
My rating: 5 of 5 stars


There are a bazillion reviews of this out there so I'm not going to get into what the book is about but rather my experience of re-reading the book. It took me the whole month of December to read as it's quite a tome. King's second longest book after "The Stand" I believe. I was 18 the first time I read this book and I've had fond memories of loving it. Since it's been so long since I read it, I kind of felt like I was just a step behind the plot, remembering things as they happened. I've been reading King in chronological order and this came at an appropriate time for me as now I can watch the recent movie. This is King's first book that takes place in Derry, though the town has been mentioned before. There are also a ton of references to his previous books up to this point such as the mention of the crazy cop killer (Dead Zone) and guessing that someone's last name was Underwood (The Stand). In general, this story is very similar to "The Body" (Stand By Me) only with monsters. I like this group of children better. It's more diverse; there is a Catholic, a Jew, a black kid and a girl included amongst the seven and I think they also are more of a comparison to the group of kids from "Stranger Things". I was surprised that the clown is not as major a part of the book as it is commonly portrayed by pop culture. I didn't find the story scary at all but there are a couple of classic King intense scenes. Most of all though the book is a tremendous story of characters with a huge cast that King juggles to perfection, one of the things I like best about King. A great book, not his best, but up there and a must-read for fans. This could also be a good introduction for first-time readers if they don't mind the length, for a shorter intro to King I recommend "Pet Semetary".