Gary Gianni's Monstermen and Other Scary Stories by Gary Gianni 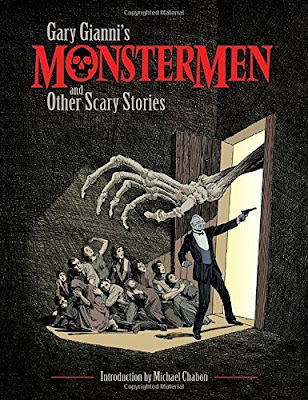 Gary Gianni's Monstermen and Other Scary Stories by Gary Gianni
My rating: 4 of 5 stars


Approximately 70% of this book is Monstermen tales. With the last section being the "other scary stories". The Monstermen are a fraternity, I guess you'd call them, that are out to save mankind from demons. This portion of the book is in graphic novel format. The stories feature Lord Benedict, a centuries old knight (I believe) who now wears a helm all the time and his companion Lawrence, a creepy movie director. Benedict is relating his various adventures to us which likened to Holmes & Watson, only doing paranormal cases. The stories are a good mix of Sherlock, Indiana Jones and Cthulu. The art is incredibly detailed b&w sketches that remind me of etchings found in Victorian literature. The environment is unsettling as everything is portrayed as being Victorian, the buildings, the clothes, the language, vehicles, etc. but every now and then modern technology will pop up to remind you this is present day in this world. Suddenly someone pulls out a cell phone, or a Victorian office full of computers, or a tractor and other heavy machinery in the background. The rest of the book is a compilation of proper text short stories which we are to believe Benedict is sharing with us around a fireplace with our brandies. The illustrations in this section are spectacularly wonderful. I think Gianni's work is more suited to illustration than "comic" format. These are all old turn of the century stories which were right up my alley. (3/5)

1. The Gateway Monster by William Hope Hodgson (1910) - Fantastic! An excellent example of a ghost story from this era. This is the first "Caranacki, the Ghost Hunter" story of which Hodgson wrote several. Caranacki is a "real" ghost hunter and in the evenings gathers round the fire and regales his acquaintances with tales of his adventures. This is a typical haunted room story. For some hundred and fifty years, the Gray Room has not been entered because violent disturbances occur within. Caranacki investigates and using his knowledge and ability to perform incantations discovers the source of the disturbance. I want to read the rest of these stories! (5/5)

2. A Tropical Horror by William Hope Hodgson (1905) - Excellent sea monster story! Written in the form of a person giving a narration of previous events we hear the blood-curdling horrific events of when his steamship was attacked by a sea serpent. Has a lot of action and tension along with gruesome description of the carnage. Liked this even better than the first story. (5/5)

3. Mother of Toads by Clark Ashton Smith (1938) - Wow, this was surprisingly lurid! I can imagine it causing quite a stir when first published. While not the greatest story it certainly was compelling. The story of what happens to a young apothecary caught in the clutches of an old, fat, toad-like witch commonly referred to as the mother of toads. (3/5)

4. Old Garfield's Heart by Robert E. Howard (1933) - I actually haven't read a lot of Howard, just the occasional short that comes up in these anthologies. I liked this a lot. Not a lot really happens but a tale is told of an old man who has been in the county since before the white men came. This night he is deathly ill and the doctor and his apprentice visit him only to find his heart as healthy as a horse. The old man tells a strange tale of his heart and his inability to die. (4/5)

5. Thurnley Abbey by Percival Landon (1908) - An old-fashioned ghost story. A man meets another on a steamship trip and finds the other has a strange request of him. So they sit down to drinks and the man tells his story, complete with quite a scary ghost. I enjoyed the telling of the tale but it was left with no explanation so left me wishing it had lasted long enough to have a resolution. (3/5)