When the Whippoorwill by Marjorie Kinnan Rawlings 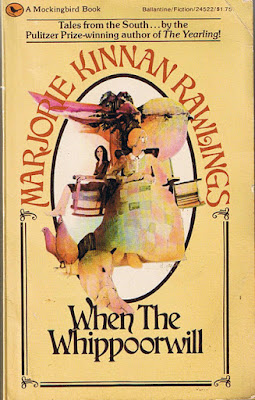 When the Whippoorwill by Marjorie Kinnan Rawlings
My rating: 4 of 5 stars


Rawlings' "The Yearling" is one of my favourite books and I've long been wanting to read her since. This collection of stories shows off her writing skills and deft ability at describing settings and characters. All set in Florida, they tell stories of backwoods people and their morals, poverty, and lives in general. I adored every story in this collection which was first published in 1940. Some I liked more than others but they were all winners and I'm glad to have read the collection. Now, hopefully, some day, I'll next get to her book "Cross Creek".

1. A Crop of Beans - Wonderful atmosphere for the first story in this collection. A bean farmer and his wife go year after year barely scraping by, then one year they have an excellent crop and the money rolls in. Examines what a cash fall can do to people, the different ways they deal with it, and finally the whimsy of good fortune. (4/5)

2. Benny and the Bird Dogs - This story's theme is certainly a product of the times. A woman narrates telling us that men will be men, whatever is in their nature cannot be changed and the wife will only cause herself grief by trying to mess with it. The story is told then of how it took Uncle Benny's wife 30 years to accept her husband's nature: a wanderer who stayed away a few nights at a time, harmless but loved, causing mischief, a reckless yet expert driver of his Ford, and a collector of bird dogs, seven at this point. Everyone in the story is a quirky character and the story is hilarious. A fun read. (4/5)

3. Jacob's Ladder - This is a full-length novella consisting of 8 chapters and emphasises Rawlings beautiful writing of sad situations. Set in Florida, first in hurricane country and then further and further south through the swamps and areas of terrific heat. Sort of a circle of life story all about character rather than plot. A poor, bedraggled and beaten girl runs off one night with a boy several years older whom she just met but feels a kinship to. They marry and spend their lives trying to earn a living and live in peace. Treachery always finds them sending them from home to home. That treachery comes from both the savagery of the weather and the meanness of fellow mankind. A beautiful story full of tragedy and a bittersweet ending. (5/5)

4. The Pardon - A man leaves prison after seven years of twenty on a pardon. When he gets home he finds things have changed drastically. No one had figured on a pardon. (4/5)

5. Varmints - Three people have known each other since childhood. The two men, Jim and Luty are always at each other about something, having arguments, stubbornly keeping opposing viewpoints, etc. The woman, Quincey, has always been the go-between and the peacemaker. This is the story of the mule which Jim and Luty bought in shares and the episode which made Quincey forever lose her patience with them (3/5)

6. The Enemy - A big-time Yankee rancher comes to town and buys off a parcel of land for taxes. Now the Cattlemen's cows can't reach the stream. Old man Milford decides to take things into his own hands but he finds the men he ruled over have learnt a lesson, even his son. Times change and people with them. (3/5)

7. Gal Young Un - More like a novella than a short story. It's clearly divided into two parts which have different atmospheres and we don't get a glimpse of what the title refers to until the second half. A wily, out-for-himself young man comes across a middle age widow living in a grand house in the middle of the country. He seduces and marries her to get at her money. The grey haired woman we slowly learn is not fooled by this but gets her own contentment from the relationship. That is until he does the one thing she won't stand for. A really emotional story which could certainly have been expanded into a novel. I was very taken with this. (5/5)

8. Alligators - This reads an awful lot like a tall story without the grandiosity of such. The whole story is a narrator telling life stories. We start by knowing a "Kate" has asked him about alligators. He starts by saying he knows nothing of them and she'd be better off asking the old alligator hunters. Then he commences on telling his own very colourful encounters with alligators throughout his life. Funny and interesting. (4/5)

9. A Plumb Clare Conscience - A moonshiner's partner comes running home with the story of them being surprised by the authorities. A day later, Tim, the moonshiner hasn't come home. The next day they want to send out a search party, most likely for a body, but the wife says wait till tomorrow evening. The next day Tim comes walking home with an incredible tale. (4/5)

10. A Mother in Mannville - This is a sad story. A writer goes into the countryside to write. She gets a cabin on the property of an orphanage. A young boy comes over to chop wood for her and they quickly come to mean something to each other, until a misunderstanding. (5/5)

11. Cocks Must Crow - The lady narrating this story sounded so familiar that I went back through the previous stories and found her! Story 5 "Varmints" is about the same character. At the same time, it is a variation on the theme of story 2 "Benny and the Bird Dogs". Quincey tells of her happy marriage to Will. He is small and spindly while she is considered the fattest woman in the county. Her marriage has been successful because she's always let Will be the man, knowing that men will be men. But now over time, she realises that she has changed and her marriage is at stake. It takes a recently arrived nearby widow to make Quincey see the wrongs of her ways. Certainly, a product of its time also including cockfighting but should be read with a mind to the era making it a thoughtful story with the lesson applying to both husbands and wives in modern times. (4/5)