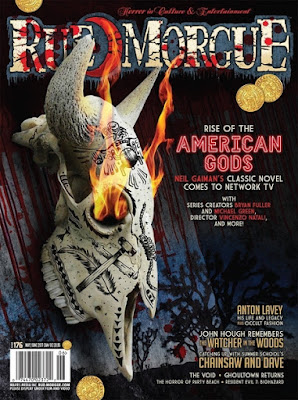 
This is the first time I've ever read this magazine but I am hooked and now have a subscription. I had never actually even heard of this magazine until recently and as an avid Poe fan could not pass up a mag. named "Rue Morgue". This is a horror magazine which stays on topic throughout and covers every medium possible TV shows, movies, books, comics, music and more. The cover feature deals with Gaiman's "American Gods". Other features cover Disney's dark side especially "The Watcher in the Woods", the thirty year anniversary of "Summer Scool" which made being a horror fan cool, and a piece on Anton LaVey, a showman and atheist who created the church of satan. On top of that, there are well over a dozen regular departments covering various topics. Even the few ads in the magazine are for fringe business dealing in the creepy, in one form or another. I read the mag. virtually cover to cover, near the back I passed over a few articles such as the regular column on music. Otherwise, this kept me entertained and informed. I've added some new-to-me series, movies and books to my tbr, along with now watching American Gods!