The Thinking Machine on the Case by Jacques Futrelle 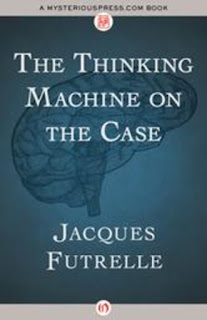 The Thinking Machine on the Case by Jacques Futrelle
My rating: 3 of 5 stars


Written in 1908 this is the first collection in a series of "The Thinking Machine", otherwise known as Professor Van Dusen, short stories. Each story is broken up into two chapters making me think they may have originally been published in a serial manner. Because of the author's name, I had assumed this would be a French detective but no, the man and the cases are American through and through. This is obviously a variation of the Holmes stories even including a "Watson", Hutchinson Hatch, a journalist. Hatch is basically a gopher as he goes out doing the Professor's legwork. Hatch can obtain plenty of information due to his profession making him have friends in both high and low places. The Thinking Machine solves his cases purely with logic, but I found the cases to be over-the-top and improbable even though Van Dusen will put them together with usually only sound logic. I'm glad to have now read this detective but generally found the stories mediocre; I'll not be reading another.

1. The Thinking Machine - This is a very short story telling the tale of how Professor Van Dusen became known as "The Thinking Machine", a man who uses pure logic to solve any problem. He is obviously based on Doyle's Sherlock Holmes.

2. The Motor Boat - A motor boat comes into a dock at full speed and crashes. Turns out the driver has been dead about 12 hours. Police conclude a heart attack but the Professor deduces otherwise.

3. The Woman in the Case - This brings the conclusion to the current case. Van Dusen and his reporter sidekick, Hatch, travel to the victim's home to interview his wife. Thence, the Thinking Machine gathers all those involved and exposes the murderer, telling how he did it. (3/5)

4. Dressing Room A - An actress mysteriously vanishes from her dressing room minutes before she's called on stage. Van Dusen deducts a crime has been committed and sends Hatch off to answer several questions he has.

5. Fitting a Hypothesis - Hatch follows Van Dusen around the city as he unravels the case and apprehends the villain. Quite an unbelievable solution but the ending was satisfyingly dramatic. (3/5)

6. The Crystal Gazer - A man comes to Van Dusen with an incredible tale. His trusted "seer" of many years has seen his death in his crystal. The man himself has witnessed the vision. He shall die in a week in his own apartments. Van Dusen takes the case and plans an elaborate ruse for the man while Van Dusen sorts things out. It was weird having this start with all the occult stuff as I didn't know how this would connect to Van Dusen at first.

7. A Matter of Logic - This one turned out to be quite fun. Quickly at the beginning the Thinking Machine figures out the case and makes arrests. The rest of the story explains how the Professor figured out the elaborate plan that was in place for the hapless client. My favourite so far. (4/5)

8. The Interrupted Wireless - A great start to this story. Very engaging which had me into the plot right away. Taking place on a passenger ship, the telegram officer is found dead with a knife in the back. The one who found him, the First Officer, is immediately suspected and soon arrested. They reach shore and we can expect Van Dusen to show up in part two.

9. The Midnight Message - The captain goes to Professor Van Dusen because he swears his friend is innocent. Van Dusen questions him and the doctor extensively, then goes to confront the real killer. The plot reminds me of the Crippen affair and his arrest on a liner, but that happened two years after this book was published. Enjoyable. (4/5)

10. The Roswell Tiara - Very intriguing mystery! A type of locked room puzzle. A rich woman wakes one night to find her vault open and a gem torn from a priceless tiara. To avoid public scandal due to her place in society, she goes to the Professor for help. He deduces the problem and gives her strange instructions.

11. A Fool of Good Intention - An overly dramatic solution based on early 1900s science makes this resolution simply silly. The solution is possible in the sense that everything is at some level possible. However, it just wasn't logical to the end which defeats the Thinking Machine's modus operandi. (2/5)

12. The Lost Radium - This is an interesting story from an historical point of view. It concerns radium and takes place while Mme Curie is alive and well. A friend of The Professor's is conducting official international experiments on whether radium can be used for locomotion. A lady visits him one day offering her own radium for the experiments, at a price. After she leaves the radium in-house is gone, stolen. The Thinking Machine then interrogates his friend.

13. The Suitcase - Another over-the-top solution, however quite plausible. As one character states, it was "audacious". We watch the Thinking Machine in action as he unravels the mystery with his logic and in typical fashion gathers everyone together to tell them how the heist was pulled off. A fun case! (4/5)

14. The Green-Eyed Monster - A man's wife starts going off for the day mysteriously and when he questions her he finds that she is not telling the truth.Eventually, he becomes so concerned he tries to follow her but she eludes him.

15. Two and Two Again Make Four - A humorous solution to the question of why the wife has been sneaking around day after day. Certainly a tale of its own time where a woman's clever, though illogical, solution to teaching her husband a lesson is praised. (3/5)

There is a printing error here as the chapter has no title nor is it listed in the toc. I started reading but it was in the middle of something happening and obviously not the beginning. I'll skip ahead to the next chapter and hope I didn't miss anything.

16. Before Midnight - This is short and the second half of the previous part above which is printed incorrectly. (0/5)

17. The Missing Necklace - We are introduced to a master "gentleman thief" and the Scotland Yard detective who is after him. The thief has never been caught and the detective is determined to catch him in the most recent necklace theft. He sets sail with him to America and searchs him, his rooms and belongings to no avail, while the thief is onto him.

18. Master of His Profession - The Scotland Yard man comes to The Thinking Machine and spends a few hours telling him everything about his recent pursuit of the thief. The Professor asks him a few questions, then solves the case and explains. Far-fetched again, but logical. Entertaining. (3/5)

19. The Phantom Motor - As opposed to all the other stories in this collection, this story is complete in itself. A trap has been set up at both ends of an 8-foot high wall tunnel to catch speeding "gasoline autos". But suddenly every evening at midnight a car going incredibly fast enters the tunnel and never exits it. Both officers stationed at the ends are baffled and it takes the Professor to expose the truth. (3/5)

20. The Brown Coat - A young man being an accomplished thief robs a huge sum from a bank. He leaves one tiny bit of evidence behind and is caught and confesses. But he has a wife he wants to provide for so the question for the police is "Where is the money and how can they get?"

21. A Human Problem - The thief is in jail and the Professor is out to find the whereabouts of the money. Halfway through this story a printing error had the story abruptly stop with text from in the middle of "The Phantom Motor"

22. The Gap in the Trail - Another printing error. The first part of this story goes back and add adds a part that was probably missing from #19 "The Phantom Moor" then it suddenly continues on where the last story "A Human Problem" was cut off. I enjoyed the brown coat/human problem story and would have rated it a three or perhaps even a four but because of the confusing printing errors, I must lower the rating. (2/5)

23. His Perfect Alibi - We start off in the middle of the night as a man wanders around with an agonizing toothache and is directed to a dentist's where he has the tooth pulled. Nex morning he is arrested for a murder which happened at the time he was at the dentist. Evidence points to him as the murderer but his alibi proves otherwise.

24. The Thinking Machine is asked to look a the case and in his efficient manner he quickly examines the evidence and the alibi then explains by whom and how the murder was executed. The typical Thinking Machine puzzle that I've come o expect at this point. (3/5)

25. The Superfluous Finger - Very puzzling case! This one is much longer than the other first stories in each two-story case. An elegant British woman enters a surgeon's office and asks to have her perfectly formed middle finger removed at the first joint. He refuses on ethical grounds and the next day she is found dead in her apartments. The Thinking Machine examines everything and the story ends with him telling us he knows just what went on here. One of the better stories in this collection.

26. The Case is Closed - The Thinking Machine sums up all the clues then tells exactly how (and why) the events occurred ending with the identity of the killers and how to find them. A good story to end the collection with and my favourite of the lot. (5/5)