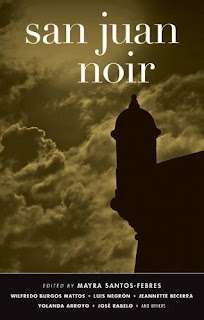 
A collection of noir stories taking place in San Juan, Puerto Rico. Even those these averaged out to a solid 3/5, I found the collection as a whole very satisfying. There is a cohesiveness found in the selections which is usually elusive in anthology collections. I came into this blind about the culture and social aspects of San Juan but feel like the collection has given me a sense for the people. Worth reading!

1. Death on the Scaffold by Janette Becerra - A good story to start the collection. A mysterious narrator tells of a painter at her very high up apartment. An incident occurs and she realises a crime has been committed. It's a strange tale with the narrator being a recluse. (4/5)

2. Fish Food by Manolo Nunez Negron - The dark story of a friendship between two men from childhood until one becomes successful and the other ends up with a hit on him from the gang lords. Very well-written and engaging. (5/5)

3. The Infamy of Chin Fernandez by Tere Davila - Our villain is a panty snatcher and he tells of the day he got caught but thankfully it was only for the panty-snatching. Quite dark. I enjoyed it. (4/5)

4. Two Deaths for Angela by Ana Maria Fuster Lavin - Very good! And very morbid. A woman who thrives on loneliness and despair tells of her close encounters with the deaths of others and her doppelganger whom she keeps seeing. (5/5)

5. Matchmaking by Mayra Santos-Febres - Short and dark. A hitman for a drug lord is given a job on a female drug lord and his life changes forever. Even though it's short we get a real sense for the hitman. Well-written. (4/5)

6. Dog Killer by Luis Negron - Another hitman at work. Written in a choppy style which makes you have to infer what happened at certain points. Ok story butI didn't like the writing. (2/5)

7. Saint Michael's Sword by Wilfredo J. Burgos Matos - This was not for me. A male prostitute wakes up in the street with an AK-47 wound in him. He stumbles to his sister's place to be patched up then he travels all over the neighbourhood searching for the one who pulled the trigger. I couldn't get over the very vulgar language and vulgar references. Weird and distasteful. (1/5)

8. A Killer Among Us by Manuel A. Melendez - Honestly, this was just boring. Starting out with the story of an adolescent and his two buddies. He has a nasty drunk for a father who beats his mother. Then a dead man is found in the town bringing about a course of events, No suspense and two-dimensional characters. (2/5)

9. Sweet Feline by Alejandro Alvarez Nieves - Good, but leads up to a disappointing ending. Narrated by a bellhop, he tells of the time a female came to the hotel spending money all over the place. She charms the staff and other guests alike but completely ignores the narrator. Until her last night when she specifically asks for him to come to her room. The suspense is good and we only figure out what is going on when it finally happens. However, you keep expecting something more to come and then it just ends. (3/5)

10. Things Told While Falling by Yolanda Arroyo Pizarro - A man, afraid of flying, tells the random thoughts he has as the plane descends for a landing. Upon landing a dead body is found floating in the river. He continues and tells what happens after. Not bad; it's dark but hard to "get" the point. (3/5)

11. Turistas by Ernesto Quinonez - A man's mother dies and he makes a deathbed promise to her to find his father. His father is famous for having been a gang member of the Vampires and gruesomely stabbing two white kids to death when he was only 14 himself. The ending was unsatisfactory for me but I think the theme here is that family is more important than any amount of money. (3/5)

12. Y by Jose Rabelo - This doesn't make any sense to me. A mathematics teacher tells about a female student who is missing and he wants to solve the problem. There are a lot of cat references and prostitution also. It was readable, but just barely. (1/2)

13. Inside and Outside by Edmaris Carazo - This has a surprise twist at the end which I never saw coming. Honestly, the story is quite mundane; a girl goes to a party with her boyfriend, drives around afterwards, and the bf buys a brick of marijuana. Very annoyed with him, they start home and up to this point, I've been thinking what a boring story. Then the climax comes, what? and finally the twist. OMG! Fun. (3/5)

14. Death Angel of Santurce by Charlie Vazquez - Well written. At first, the story seems to be a day-in-the-life of a prostitute but as the night wears on things turn dark and we're surprised with an unexpected ending. All the action happens at the end thus allowing the author to give a good character sketch of the main character. (4/5)