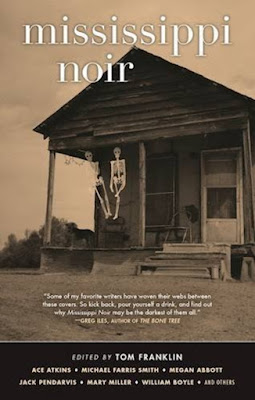 edited by Tom Franklin
My rating: 3.5 of 5 stars


A mixed-bag of contemporary stories taking place in Mississippi. Averaging out to a solid 3.5 stars.

1. Combustible by Ace Atkins - An abused girl gets back at her stepfather. Short good read with a dangling ending. (4/5)

2. Lord of Madison County by Jimmy Cajoleas - Wow! I don't even know how to start. This is about rich, white kids. The main character hooks up as a drug dealer out of boredom, fakes getting Jesus, bags the pastor's daughter and ends up in very serious trouble with his supplier. A hardcore story but in the end it's about the pastor who really does practice what he preaches. (5/5)

3. Losing Her Religion by Rachell R. Smith-Spears - Heavy duty story of a woman who gives up everything for the married man who has just broken up with her. Powerful writing. (5/5)

4. Most Things Haven't Worked Out by William Boyle - Fantastic! A rip-roaring exciting read. A crime you could say, but it's about two people who were abused as kids and how they were ruined, one by hate and one by kindness. A very poignant ending. Complex, interesting characters. (5/5)

5. Uphill by Mary Miller - Nothing really happens in this story. A woman with a penchant for loser boyfriends tells about her current situation and ruminates on her past and future. Pretty boring. (2/5)

6. Boy and Girl Games Like Coupling by Jamie Paige - Very short. Narrated by the boy, it's about the moment a girl learns she's dating a psychopath. (3/5)

7. Oxford Girl by Megan Abbott - Brilliant. I loved this story! The narrative switches back and forth between a college couple starting with the girl finding out she's pregnant. Then they each tell the story of their relationship from the beginning to the dark, dark end. (5/5)

8. Digits by Michael Kardos - This is really creepy and I loved it until the end. A college English professor notices that students in the class are missing fingers. It's a great creepy story but ends suddenly and I didn't get it. I still don't get it. I would have given it a five but my rating is reduced because don't like stories to leave me bewildered. (3/5)

9. Moonface by Andrew Paul - A man recounts an event from his youth when he caused someone's death. OK. (3/5)

10. God's Gonna Trouble the Water by Dominiqua Dickey - This is a sad story but has a redemptive ending. A white boy and black girl have a four-year-old daughter. The boy wants nothing but them to be a family, while the girl knows they can ever have a normal life together because of their colour. The boy steals his little girl every now and then to get her mother to come to him. This time, he takes her on the night of a big storm and it's the last time he does. Very good. I love the narrative voice. (5/5)

11. My Dear, My One True Love by Lee Durkee - This is very short, a few pages. So briefly, a man narrates his attraction to crazy women. The ending was as I expected. Not bad. (3/5)

12. Hero by Michael Farris Smith - Just ok, not much really happens. About a boy who doesn't talk and his abusive father narrated by the next door neighbour who takes day labour jobs and has a large psychic-for-hire wife. (2/5)

13. Pit Stop by John M. Floyd - On a road trip, a mother tells her daughter about the time she was attacked by a serial killer. A really good story that had me riveted. Only problem is that the ending was disappointing. (3/5)

14. Anglers of the Keep by Roger Busby - A melancholy tale of a dying man whose daughter has arranged a lung transplant for him. The man tells his secrets to his ex-son-in-law on the journey to the clinic. (4/5)

15. Jerry Lewis by Jack Pendarvis - A guy has a mysterious encounter with a dangerous woman. Short and kind of dumb. (2/5)

16. Cheap Suitcase and a New Town by Chris Offutt - A lonely woman waitressing in a town she recently moved to gives a much younger waitress some advice and then moves on. I don't get the point of this. Boring. (1/5)