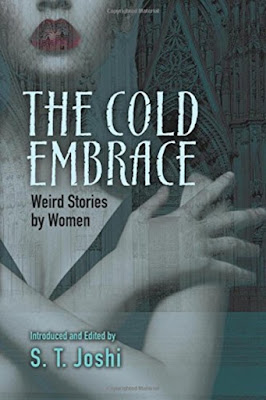 This is an uneven collection of a few excellent stories and a number of ones that just didn't work for me. The tales told well are strong enough to bring my average rating of the collection to a solid three. My main complaint would be that many of the stories were only barely what one could call "weird" and nothing that really made me shudder. It was a fresh collection for me, though, with only two I had read before and Charlotte Perkins Gilman's "The Yellow Wallpaper" is the highlight of the collection. The end of the book is a collection of brief biographies of all the authors. I prefer this type of material to be placed as an introduction to the story making it more relevant to the material. This volume had no editor intros before the stories.


Introduction by S.T. Joshi - Essay on the impact of women writers in the "weird tales" genre. Sets the stage for the book but too broad to be of any insight.

1. Transformation by Mary Shelley (1830) - A man upon the death of his father squanders his inheritance, loses his betrothed, and the respect of her father. His pride keeps him from seeking forgiveness and instead he lives a life of debauchery and revenge. Then he meets a demon and makes a trade for riches with which he feels he can win back all he's lost. Of course, things don't turn out the way he'd planned. Shelley writes well and is easy to read. Not bad. (3/5)

2. Curious if True by Elizabeth Gaskell (1860) - Not impressed. An Englishman takes a walk in France and realises he has gone too far, seeking asylum somewhere he finally comes to a forest and enters. It is there he finds a grand old mansion with a party going on. He enters and the people are a little odd. Then it just goes on and on with nothing happening. He gets into little strange conversations with people and we are waiting for something to happen, the punchline, if you will. When all of a sudden. It ends. Nothing! (0/5)

3. The Cold Embrace by Mary Elizabeth Braddon (1860) - A ghost story. A jilted woman jumps off a bridge and exacts her promise towards the man. That forever, even in death. they will not be separated. Good mounting tension, but just ok, not worthy of being the titular piece. (3/5)

4. An Engineer's Story by Amelia B. Edwards (1866) - Somewhat long-winded but a readable story about two men, best friends, who are ruined because of a woman. But in the end, it is a ghost story and one of redemption. (3/5)

5. The Secret Chamber by Margaret Oliphant (1876) - This is a very long story divided into three chapters. A family has a curse upon it passed down from father to son, generation after generation involving a secret room hidden in their ancestral home which has been here on the site in one form or another since the Celts. The first chapter is long and somewhat boring but it makes you wish the story would hurry up and get on with it. Chapter 2 is worth the wait with its reveal and the third chapter ends without a resolution but it leaves a spooky feeling. (4/5)

6. From the Dead by E. Nesbit (1880) - I really enjoyed this. I've read a few of Nesbit's weird tales and of course her children's books. Ultimately a ghost story. A man and his wife are separated because of a misunderstanding. Then several months later she writes him where she is and she's dying. Has a creepy ending. (5/5)

7. Walnut-Tree House by Mrs. J.H. Riddell (1882) - This is divided into chapters but isn't overly long. It's a well-written Gothic with a gloomy old house and a ghost. It could very well have ended with the sentence of the second last chapter and would have pleased me more. The final chapter is a happy denouement which is good if you like fairytale endings but spoils the previous Gothic tone. (4/5)

8. In Dark New England Days by Sarah Orne Jewett (1890) - I wondered if I had read this one before and I quickly realised I had and not that long ago. I remembered the story only not the ending. It read well again and I enjoy the Gothic tones, the villain getting his and the sombre ending. Just checked and I gave it the same rating last time. (4/5)

9. The Yellow Wall Paper by Charlotte Perkins Gilman (1892) - I've only read this once and loved it again on a second reading. I enjoyed it more, this time, having learned a bit about why Gilman wrote the story, between reads. I noticed sarcasm that I probably missed first read through. A woman is declared "nervous" and "hysterical" and prescribed the "rest cure". We learn of a baby halfway through. In today's terms, she would have been diagnosed post-partum depression. Instead, Gilman shows how the "rest cure" can drive a perfectly sane person, insane. (5/5)

10. Death and the Woman by Gertrude Atherton (1893) - This is creepy. A woman sits alone with her husband on the evening he will die. They are young and he has been ravished by disease. All sorts of things go through the woman's mind that one could worry about when unfamiliar with death. The ending is predictable, but probably not so much at the time it was written. (5/5)

11. A Wedding Chest by Vernon Lee (1904) - The ornately painted lid of a box is being entered into a collection one assumes is a museum. Then we are taken back to a medieval Italy and the story of the wedding box said lid belonged to, the man and woman who were to be married, and the scoundrel who kidnapped her on the eve before the wedding. I found it readable but boring. (1/5)

12. The Hall Bedroom by Mary E. Wilkins Freeman (1903) - I liked this! It was obvious what was happening but still good. A man rents a room in a boarding house of a once well-to-do landlady. His room is the hall bedroom and every night something strange happens. He isn't scared just excited for the adventure of it. Then he simply disappears and the landlady provides us with the man's journal accounting his stay there. (5/5)

13. The Eyes by Edith Wharton (1910) - This makes little sense and when I'd finished it I googled an explanation. There are a few very different theories on what the ending means and there seems to be no one consensus. Personally, I hadn't a clue what had happened and can't be bothered with stories you have to study before you can understand them. It was pretty boring too. (0/5)

14. The Painter of Dead Women by Edna W. Underwood (1910) - A creepy story of a woman who is kidnapped by a "cerebral",who has a collection of preserved women that he paints. It is a good story of how she escapes but is also obviously a feminist tale of how a woman easily outwitted a man who supposedly had a perfect brain. She is also athletic which adds another element to her besting the killer. (4/5)

15. The Shadowy Third by Ellen Glasgow (1916) - A young nurse takes on the job of night nurse to a doctor's wife who has been deemed to have gone mad since the death of her daughter. A delightful tale with all the elements of a Gothic: an old house, a madwoman, a ghost and a killer. Great ending. One of my favourites in this collection. (5/5)

16. Scoured Silk by Marjorie Bowen (1919) - A haunting tale of a man's first wife as he nears the marriage of his young second wife twenty years later. There is a mystery of the first wife who died shortly after arriving which terrifies the new wife-to-be into investigating it. The story ends with a nicely crafted locked room murder mystery. (5/5)

17. The Death Mask by Mrs. H.D. Everett (1920) - A man visits an old college friend who has been widowed four years. He suggests the man should remarry but the friend then tells a ghostly tale of why he cannot remarry. Good, but the ending is too abrupt and unsatisfying. (3/5)

19. Where Their Fire is not Quenched by May Sinclair (1922) - This was a good choice for the ending and a longer story. We go through a woman's life from young, eager love to adulterated, sinful passion. She dies and we follow her into the afterlife. The story has deep religious tones at the end and could scare you into making a true confession at the end. (4/5)