The Wicked Boy: The Mystery of a Victorian Child Murderer by Kate Summerscale 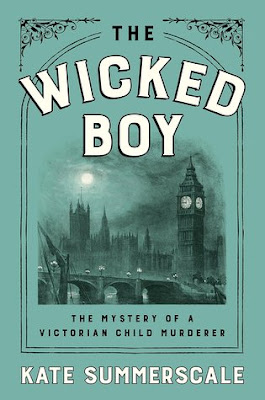 The Wicked Boy: The Mystery of a Victorian Child Murderer

by Kate Summerscale
My rating: 5 of 5 stars


Fantastic book! page-turner I read over a few days. First and foremost it is a social history of the periods 1895 to the early 1940s. This history follows the lifespan of an obscure but fascinating individual, Robert Coombes, 13, who murdered his mother. There is the story of the murder, the trial with quotes from the transcript and the aftermath of verdict and sentencing. During this period we learn so much of living in east London, the first applications of new child protection laws and Coombes childhood history. Later Coombes is sent to Broadmore and the fascinating portrayal of how far ahead of the times the psychiatrists there were. This was probably my favourite part as we learned about day to day life there for the troubled but either wealthy or educated men, as that is the ward where they placed the youngster. I was fascinated with how the prison asylum worked and this section contained many quotes from the employee's red handbook of rules on how to treat the patients. Then we see the inside workings of a Salvation Army community, one founded by William Booth himself. Halfway through the book, the setting is switched to Australia and I was amazed to find a recounting of WWI through the ANZAC point of view. The action goes from Gallipoli to Passenchadale. The epilogue is amazing but I won't say what it is about as it's fascinating. As to Robert and his crime, he never really gave sufficient explanation and the author goes through all the possible motives or reasons from the contemporary experts (reading Penny Dreadfuls, brain irritation, de-evolution, etc.) to speaking with a current doctor at Broadmore who puts it down as a psychotic episode brought on by his dysfunctional family life and surroundings. This is the second book I've read by this author and I will certainly read her others. Social history at its best!