The Devil's Defender: My Odyssey Through American Criminal Justice from Ted Bundy to the Kandahar Massacre by John Henry Browne 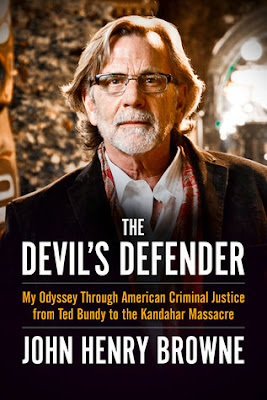 The Devil's Defender: My Odyssey Through American Criminal Justice from Ted Bundy to the Kandahar Massacre

by John Henry Browne
My rating: 4 of 5 stars


A very compelling book that had me turning the pages quickly. I've never read a lawyer's book before except ones by the prosecutor of a big case such as Vincent Bugliosi's books. But the thought of reading about the defending lawyer of people he knows are guilty, some of them having committed heinous crimes intrigued me. Why do these people do what they do if they are not just scumbags, too? John Henry Browne got me to read his book because he defends guilty people who will be facing the death penalty. His job ... to stop the murderous cycle and get the perpetrators a life sentence instead. These aren't the only cases he takes but it's a big part of what he does. Myself, I am adamantly against capital punishment but am glad Browne does the job and not me. He retells his famous trials and his addictions to drug, alcohol and his ego. This is all very fascinating and he made me aware of a couple cases I didn't know so well. Browne writes well but he still obviously has an ego which makes him a little hard to take at times telling us how great he simply is. The Ted Bundy parts are the meat though and brought some new perspective to his case for me. Ultimately, though, the book made me think about my beliefs and consider the legal system and its corruptness.