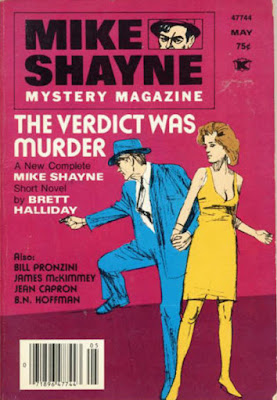 
Digest-sized magazine printed on newsprint. The first story is always a Mike Shayne "short novel". As with the Shayne, the majority of the stories are what would be called crime; there is very little mystery involved. Throw in a couple of actual mysteries and a thriller "weird" tale and that's what you can expect from these magazines. I've never heard of any of these authors and suspect some may be pen names. But overall the book was a solid 3.5 stars

1. The Verdict Was Murder by Brett Halliday - Not a big fan of Mike Shayne but this one had him in all sorts of action. Drugs and stolen cars, a dirty cop and a widowed cop's wife having trouble with her eldest son going criminal. (3/5)

2. The Dark Side by Bill Pronzini - A silly little horror story. An academic man with few friends (or enemies) starts suddenly receiving parcels in the mail: the first a gun, next a butcher knife and so on until he figures out who is sending them. You can tell this was written in the '70s by the solution. (3/5)

3. The Crimes of Harry Waters by James McKimmey - This is a comedy. Harry is a poet and a poor one at that. Down on his luck, he decides the best thing for him is jail: a bed, 3 square meals, and the comfort to write all day. So he sets off trying to commit crimes but instead each time he does the "victim" a favour by robbing them, vandalising property etc. He ends up fairly wealthy and then he gets "his" in the end. It was predictable but fun to read. (4/5)

4. The Barn Dance by B.M. Hoffman - A husband has a business meeting with another man, so he and his wife travel to stay with them overnight. The partner's wife, Helen, turns out to be a vile, vindictive harridan who must have her own way. Carolyn spends a tourist day with her and ends up hating her.The wife takes the couples square dancing and during the evening all the punch drinkers get sick, with Helen dying. A little beyond believability but good story with a bleak ending that reads well and doesn't feel dated. (4/5)

5. Last Night I Heard Him Crying by Jeanne F. Carron - This is really good. A woman always has the same dream. Her husband, who majored in psych encourages her to explore the dream and come to terms with whatever is bothering her. After being hypnotised and a subsequent visit from her adoptive mother she knows the truth. All the psych talk and dream stuff are very out-moded seventies jargon, but it's still a good story. The only problem is it ends abruptly without really making sense. (4/5)

6. Hit and Run by Edward Van Der Rhoer - This is a good Private Eye case. Lots of wondering and not knowing who the culprit or even what exactly is the crime. A woman hires our PI to find out if her separated husband has written a new will leaving everything to his new girlfriend. There is way more than meets the eye. Good story, but the ending was disappointing as it was sexist even for the time it was written. (3/5)

7. Of Course, I Killed Him by Doris L. Goldberg - This is a good one, though dated. A husband becomes jealous when his homemaker wife starts selling stories and becomes quite well-known, (5/5)

8.Motive, Motive... by Art Crockett - Pretty good straight cop piece. A lady is found stabbed just inside her door. The bellhop finds her.The only other person on that floor noticed is a stooped-over 92-year-old man. Our detective figures it out. (4/5)

9. Kiss Her Goodbye by Herbert Harris - Just a quick little piece about a band player caught cheating by his high society girl. What got me on this was the guy's name is Ricky and he plays in a band at the "Tropicala" and the dame is a redhead. Remind you of anyone? (2/5)