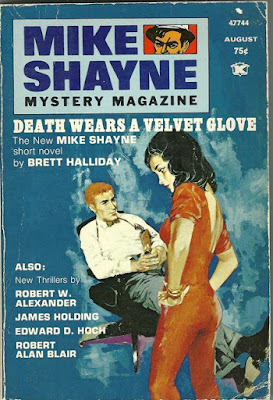 I have three of these magazines and the other two have great covers. I'm going to hang them on the wall in shadow boxes when I've finished reading them. This is not a great magazine, most of the writers only ever wrote a few shorts but there are a couple of names here besides Halliday; Hoch and Holding. I only really liked one and that is the little thriller from Hoch. It's on a different level than the others which pretty much deal with police, criminals and street crime. Not my kind of mystery", but the stories average out for a solid three for the magazine as a whole.

1. Death Wears a Velvet Glove by Brett Halliday - The first story in each edition of this magazine is a Mike Shayne "short novel". I'm not a huge fan. This has Mike being called in to check up on whether a person is ok. He gets caught up in an adventure on a private island that has rich folks trying to get richer and rich kids being spoiled brats. Readable but corny. (3/5)

2. A Woman Seven Feet Tall by Robert W. Alexander - A fun variation on the locked room mystery. A wheelchair-bound woman calls in the police approx. ten minutes after her playboy husband has been murdered. The building she lives in is ultra-tight security. No one could have come or left her apartment unnoticed. And yet she says she witnessed the attack by a woman seven feet tall. A bit overdramatic but a clever mystery. (3/5)

3. Twine by Edward D. Hoch - This is a good little thriller. A journalist finds out about an elderly man who collects twine. He has about a 5-foot ball in his bedroom. The journalist gets a bizarre idea about the man and investigates. Funny thing is, I read the first two paragraphs and got the same bizarre idea before the ball had even been mentioned! There is a twist ending which makes it even creepier. (5/5)

4. Death of a Bookie by Herbert Harris - Straightforward bit where a young detective walks his Superintendent through a crime scene explaining why the locked-room incident was not suicide. The language dates it. (2/5)

5. A Rope Through His Ear by James Holding - A well-written story though hardly a mystery. I'd call this crime fiction. A rich collector goes to Peru and manages to find a valuable antiquity on the black market. His problem is not obtaining it but figuring a way to smuggle it through customs. A nice twist ending that gives the otherwise mundane story an entertaining conclusion. (4/5)

6. The Old Home Place by Robert Chesmore - In this story, the conman is presented as likeable. He's a gambler by trade, comes back home to visit his wealthy sister and finds her husband has a case full of ill-gotten money. He plans a heist with a former army buddy and things don't go the way he'd planned. The twist at the end makes us feel even more for the unlucky brother. (4/5)

7. The Bubble by Robert Alan Blair - A female sergeant is asked to work a plain clothes assignment to capture Heroin dealers. She gets found out pretty quick and uses her wits to bring the case off. Not exactly exciting but readable. (3/5)

8. Hang For a Sheep by Edward Wellen - An unethical radio journalist reports that a man with a hostage has killed a cop even after the radioman had been expressly forbidden to report it yet by the police. The hostage gets killed and the reporter gets his. (3/5)