No Way Out by Alan Jacobson 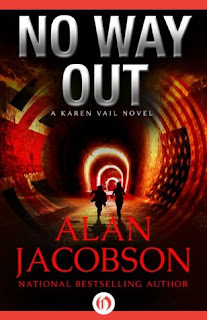 
It took me a while to get into this book as it's not a typical Karen Vail serial killer thriller. Two themes run through the book which I usually am not interested in reading; first a conspiracy theory and secondly terrorists. Karen is sent off to England for consultation but quickly finds herself being told of a stolen manuscript and the reason? one of the many who really wrote the Shakespeare plays conspiracy theories. This part bored me to tears but Karen's sarcastic personality and annoyance with British parlance kept me going. The plot quickly turns to terrorists, arms dealers, Arab terrorist cells and black ops with Karen in the middle of it all. I'm not into terrorist plots or political thrillers so was slow to warm up to the book. But have to admit that once the chase starts I got caught up in the action. Hector DeSantos, a black ops agent returns from a previous book and the relationship between he and Vail is dynamic and full of witty repartee. The book's an adrenaline rush with Vail and the black ops team either chasing or being chased non-stop with practically no moments to come up for air. I prefer serial killer thrillers so this is not my favourite book in the series, but it did hold my attention after the slow start. Jacobson is a good storyteller and I look forward to the next book, just hoping Karen gets back to profiling a killer.