London's Glory: The Lost Cases of Bryant & May and the Peculiar Crimes Unit by Christopher Fowler 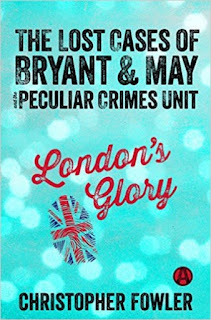 London's Glory: The Lost Cases of Bryant & May and the Peculiar Crimes Unit

by Christopher Fowler
My rating: 4 of 5 stars


The book starts off with a couple of excellent short essays on why we like fictional crime stories as readers which are humorously spot on and also the author comments on his Bryant & May books. Next follows a cast of characters with ample descriptions which I found fantastic as a newbie to this series! The author introduces each story with a short backstory on where the idea came from. I love collections that take the extra effort to introduce each story as it makes the experiences well worth it for the reader. As I had never read the Bryant & May series before, I found this collection a wonderful introduction to them. References to their previous cases are made which will make reading these a different experience for a fan but as a newbie it only made me want to know them more. I found them a lovable, bickering pair of detectives who work 'peculiar crimes' and I'm very much interested in adding this series to my reading list. Getting the first book, "Full Dark House", on my tbr right away!

1. Bryant & May and the Secret Santa - B&M are called to a department store to check in on the death of an 11yo boy who fled earlier in a panic after visiting the Santa and rushed into traffic meeting his death. This was fun! I especially enjoyed the word play and bantering between B&M. I'm really looking forward to the next story. (4/5)

2. Bryant & May in the Field - On a more serious tone than the first story, though a bit of the wit is still there. This is a puzzle-style mystery. A woman is found dead centre in the middle of a field in winter with her throat slashed. Authorities are stumped because the only footprints in the snow are those of the victim going towards her body, and those going to and from by the dog-walker who found her. B&M do some logical sleuthing to find the strange and peculiar answer to how and by whom she was murdered. (4/5)

4. Bryant & May in the Soup - Going back to the '50s, this case has the detectives looking into a man suddenly dying during an epidemic of London Fog. Nifty puzzle but not as good as the others so far. (3/5)

5. Bryant & May and the Nameless Woman - A striking woman walks into the offices and announces to May that she will be killing a man (provides picture) in a week. A week later said man is found drowned in a private club's swimming pool and the last person seen leaving the building is waiting in the interview room requesting to speak only to May, it is the woman who refuses to give a name. A man who gets his and we kind of hope the woman will get away with it. (3/5)

6. Bryant & May and the Seven Points - This is a creepy, rather gruesome tale of a missing MI5 agent and a carnival with a sideshow attraction. I figured it out but that didn't make it any less creepy or fun. Bryant and his housekeeper were more involved in this one. I'm really liking these characters! (4/5)

7. Bryant & May on the Cards - This one is a bit longer than the others, but also not quite as good though still fun. An ex-Army, ex-convict's wife leaves him for better pastures and then he gets framed for her murder. Seems she got herself into an even bigger mess than when she was with him. This features mostly May. (3/5)

8. Bryant & May Ahoy! - A classic "country manor" mystery, only the place where everyone is congregated here is on a yacht. The owner's wife has been poisoned, and can only be saved if doctors can find out what she was poisoned with. Of course, the poisoner must be one of the persons aboard the yacht and Bryant and May must sleuth out the perpetrator before time runs out. Some fun language play from Bryant as he goes on about where various old-timey sayings come from. (4/5)

9. Bryant & May and the Blind Spot - A change of pace as this one is written from the pov of Janice Longbright a detective sergeant at the PCU who goes on assignment with a security detail watching the French ambassador's wife while on a shopping trip. She uncovers sloppy work on behalf of the security department but ends up crossing a dishonest cop. May is present and Bryant makes a cameo. A peek into a character who is part of the books. (3/5)

10. Bryant & May and the Bells of Westminster - A trip back to the 1960s for a case B&M couldn't solve twice which involved a group of mod. young ladies and a dead crusty old politician in a locked library. There's mention of more to this case. Wondering if this is referencing one of the novels? Fun. (5/5)

11. Bryant & May's Mystery Tour - Bryant calls May to meet him at a bus stop and as they take a tour bus he explains the murder case they've been called in on and how he's figured it out and that they will be arresting the perp. in an hour, giving May time to slowly figure it out as well. (3/5)