Not Quite the Classics by Colin Mochrie 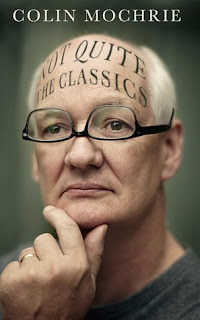 Not Quite the Classics

by Colin Mochrie
My rating: 4 of 5 stars


Colin Mochrie, famous for his improv, has put his talent into story format and written a book! Not Quite the Classics is not quite literature but is full of a dozen rollicking good yarns. Each story starts with the first sentence of a classic piece of literature and ends with its last sentence. These are printed in bold so the reader knows when they start and stop. In between those appropriated words are rambling pieces of comedic buffoonery that could only come from the mind of Colin Mochrie. I read this book but for the first time in my life as a non-audio book person, I was hearing Mochrie's voice in my head and actually wishing I was listening to the audio version. Only one of the twelve didn't amuse me, the others had me laughing out loud from giggles to outright guffaws. Mochrie may not quite be the best writer, but he is quite certainly one of the funniest Canadians plying the craft today. I 'd certainly pick up a second volume of these humorous literary gems if he offers us more!

1. A Study in Ha Ha (inspired by Arthur Conan Doyle's A Study in Scarlet) - Fun. Sherlock takes on the study and science of humour and decides to become a stand-up comic performing at a local pub's weekly talent show. Mochrie capture's Holmes' essence quite well and it is an amusing story. Mochrie's own voice is loud and clear; I could hear him inside my head telling the story. Fun but not great. (3/5)

2. Moby (inspired by Herman Melville's Moby-Dick) - A horror story about Ishmael Moby, a balding actor, whose life changes when he meets a toupee with a mind and power of its own. Silly but fun. (3/5)

3. Casey at the Bar (inspired by Ernest Thayer's "Casey at the Bat") - Haha! Loved this! Truly Canadian all the way as Mochrie re-writes the famous poem making it about an old disgraced hockey player at a bar. (5/5)

4. The Nineteen Hundred and Eighty-Fourth (inspired by George Orwell's Nineteen Eighty-Four) - The first long story; this is a total farce. Keeping a dystopian plot like the original, Mochrie turns it into a cross between a fairy tale and a fantasy channeling Terry Pratchett. Outrageous fun as a magic shop owner is recruited by the rebels to overthrow the tyrannical King because they have been led to him by the Oracle. A few nods to Orwell's 1984 are included such as a siamese set of twins named Big Brother and Little Brother. (4/5)

5. A Tale of Two Critters (inspired by Charles Dickens's A Tale of Two Cities) - Wow. A serious, violent and touching story written from Wile E. Coyote's point of view. Darkly hilarious as well! (5/5)

6. The Cat and my Dad (inspired by Dr. Seuss's The Cat in the Hat) - The author cheats a bit for this one by paraphrasing the first stanza, then changing the words to the last sentence to reference his own story, but that didn't stop me from loving this Seussian zombie apocalypse rhyme. (5/5)

7. Franken's Time (inspired by Mary Shelly's Frankenstein) - Black humour and horror combine in this ludicrous tale of a man and his close relationship with a rooster. Mochrie manages to keep many elements of the original and writes a morbidly funny tale. (4/5)

8. Waterhouse Five (inspired by Kurt Vonnegut's Slaughterhouse-Five) - This is the first story where I haven't read the original book so any humorous references are lost on me. However, this is a totally comic story of the most outrageous proctal exam anyone could possibly imagine. Undergone by poor Billy, the world's most unfortunate soul. LOL (4/5)

9. 'Twas Not Right Before Christmas (inspired by Clement Moore's "Twas the Night Before Christmas) - Hilarious! These poems are my favourite parts of the book. There's been a shift in the space-time continuum and when the narrator gets up in the night he's visited by the Ghost of Christmas Past accidentally, then in pops Clarence the Angel, they start arguing, and eventually all mayhem breaks lose as the characters from all Christmas classics and TV shows and movies turn up. Wild. (5/5)

10. The Grateful Gatsby (inspired by F. Scott Fitzgerald's The Great Gatsby) - A delightful British farce! An impoverished British Lord is trying to save his estate by making an advantageous marriage for his daughter. This is where the wild American comes in. Set during World War I. Quirky and lots of fun. Probably the best-written story in the book so far. (5/5)

11. Re: Becker (inspired by Daphne Du Maurier's Rebecca) - A delightfully morbid tale. A man find's out he's just inherited his only friend's vast estate after a sudden death. But the will comes with one very strange condition that he, however, has no qualms over. The second story I haven't actually read the book of, but I have seen the movie more than once; Mochrie keeps several nods to the original here for fans in this darkly humorous and very British tale. (3/5)

12. Faren Heights Bin 451 (inspired by Ray Bradbury's Fahrenheit 451) - Boy, a bit of a dud to end the book with. A noir private eye has the private dick searching for a missing set of keys for the lovely dame who came into his office. Things get convoluted with a cast including a midget, but the humour of this one fell flat on me. (2/5)