Dear Canada: If I Die Before I Wake: The Flu Epidemic Diary of Fiona Macgregor, Toronto, Ontario, 1918 by Jean Little 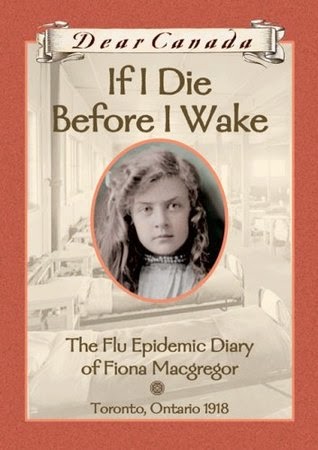 If I Die Before I Wake: The Flu Epidemic Diary of Fiona Macgregor, Toronto, Ontario, 1918 by Jean Little
My rating: 5 of 5 stars

Jean Little's contributions to this series are exceptional and "If I Die Before I Wake" is no different. Little portrays life in 1918 Toronto vividly. The Spanish Flu Pandemic is, of course, the main theme but various other topics are also explored: the last year of WWI, Armistice Day, class distinctions, women doctors and the growing changes in women's freedom. General everyday life is explored deeply showing the great conveniences now available since the parent/grandparent's Victorian days and the hardships the reader will notice compared with modern day's easy use of technology. Fiona introduces us to her unique family consisting of multiple twins, widowed father and Aunt caretaker bringing great character development and a charming, lovely household that we grieve with when the obvious death(s) occur(s). I was surprised though because I thought clues were being given that a certain character would be the one who perished and I, thankfully!, was wrong. The book is better given to the older age range of this series (8-12) due to the amount of death and descriptions of the disease. The ending is satisfying enough but the usual epilogue which tells what happened to the characters after the book was unusually depressing. Also includes some good photographs at the end, though more seem to be from Alberta & Manitoba than Toronto, where the book is set.