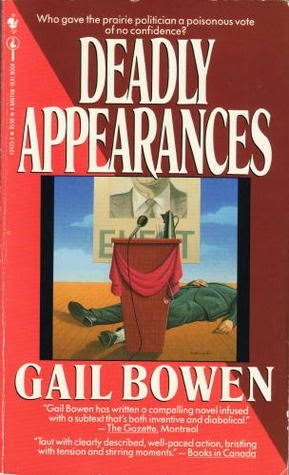 Deadly Appearances by Gail Bowen
My rating: 4 of 5 stars

Well, I sure wish I hadn't waited so long to start this series! It's not my usual "serial killer thriller" mystery and I thought it might be lame because of the politics theme but this Canadian author is up to book 15 in this series so I had to see what was up. Deadly Appearances is at heart a political mystery with the book starting off with the murder of the prime candidate for Premier of Saskatchewan. The main characters then are all those surrounding his political campaign, spouses, and friends. I found this an engrossing quick read but not because of the actual mystery. What impressed me the most was character development and the focus on the amateur sleuth's family and its dynamics. Mysteries often forgo characters for action. The mystery wasn't very hard to figure out but the nuances of the motive and secrets that were revealed dealt with real issues. The story was authentic, as were the characters and I found the main characters fully developed. I most certainly would continue on with the series