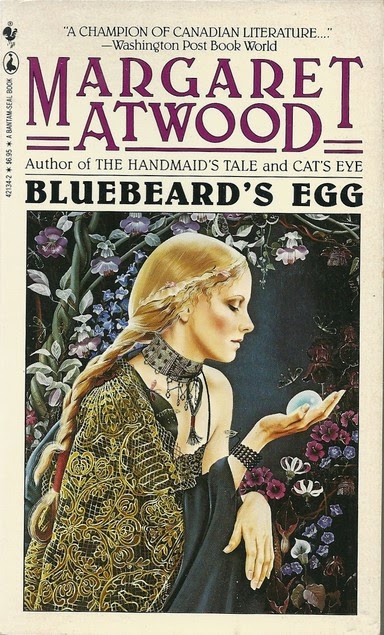 Bluebeard's Egg by Margaret Atwood
My rating: 4 of 5 stars

I'll start off by admitting that I'm a great fan of Atwood's writing but absolutely cannot stand her as a person. This being her earlier work I expected to run into some of the vitriolic, man-hating feminism of hers that I can't tolerate. However, I only came to heads with her a couple of times. I found this collection quite satisfying. Due to my opinion of the author feel free to read my following comments with interest, amusement or offense. These are the thoughts that ran through my mind after reading each story.

A couple of the stories were previously published, but the copyright page gives no further details.

1. Significant Moments in the Life of My Mother - The narrator reminisces about the stories her mother used to tell about her own childhood between the wars. The mother is a wonderful storyteller but, even though the stories are told dramatically and humorously I noticed that each one was really in some way unpleasant. There is talk of what life was like back then when men were men and women were ladies. There is some deeper feminist significance to this that I won't go into. Overall, a very engaging historical fiction. (5/5)

2. Hurricane Hazel - No time is given, but it felt like the fifties to me here as the narrator describes the year she was 14 and had her first boyfriend, a 17yo mechanic. She doesn't have any feelings for him or dating in particular, but does all the things that she feels are expected of her at this stage of her life. It is an innocent relationship that the rather mediocre boy feels will eventually lead to permanence but our narrator never sees it as being anything more that a way to spend her time. A well-written tale I enjoyed reading, with an always rather morose feeling hanging over it. (5/5)

3. Loulou; or, The Domestic Life of the Language - This is a character study of a woman of undetermined age, possibly 40, still good looking in a muscular, earthy way. She is a potter and lives in a cottage with five men: her ex-husband, three ex-lovers, and her current husband; all of them poets. A lot of wordplay goes on amongst this group of people, but Loulou does start to wonder if she needs to move on and experiments with this when she hires a local village man to be her accountant. I think Loulou strings the men along, got what she wanted from them but was not scheming in any way; there was some innocence in her subduction. An interesting peek inside a strange family unit. (4/5)

4. Uglypuss - A depressing tale about a woman scorned. Told from the man's perspective we can take him to be an unreliable narrator but towards the end the woman takes over the narrative and both of them prove they were/are in a dysfunctional relationship. Well-written of course. I don't like Atwood's version of feminism, it doesn't work on me. Here I found the man to be a jerk but the woman was a crack-pot (of her own doing, not by his.) (3/5)

5. Betty - The story of a devoted wife and her charismatic husband who inevitably ends up leaving her for his secretary. An unreliable narration from a woman who knew her as a child and final sentiments on the callousness of all cheating men. A well-paced, well-written story but I disliked both the man and woman and couldn't have cared less. (3/5)

6. Bluebeard's Egg - The titular story of this collection is the longest one so far but is a very fast read. The story flowed very quickly and kept me engrossed. It is a strange tale though. Told by an unreliable narrator, the wife; she starts off talking about her husband and how "stupid" and simple-minded he is up to the point where we think he may be mentally challenged she then discloses he is a heart surgeon. Then she goes on with her story telling how much she loves this man she has been with for quite some time and how endearing his naive and childish character are to her until one day she suspects he might just possibly have been unfaithful to her. Then she has the audacity to say her husband must have been putting on an act and deluding her all these years! A very unlikeable woman indeed! Nevertheless, an engrossing story. (4/5)

7. Spring Song of the Frogs - This is quite depressing, but I like depressing. Told from a man's perspective but not in the first person. We get to know him a bit through three separate occasions. First he is on a first date with some expectations but when he catches the woman looking at herself in the glass of a picture behind him he can't wait for it to be over. Then he visits his niece who is in the hospital with anorexia nervosa. Finally, an old lover visits him for a dinner date at his house. There is a theme of thin, sickly women; this man wanting love but not knowing how to find it and finally his probability of having found it once with the ex-lover but not seizing the moment and now it's too late. (4/5)

8. Scarlet Ibis - This is my favourite story so far. Narrated by a woman who is on a vacation with her husband and youngest, preschool, child in Trinidad because the husband is "under pressure" and "needs rest". She complains a lot about their relationship; of how the husband is irritable and she feels invisible. Being an Atwood story and the way previous relationship stories have turned out in this collection, it is a nice surprise to see them encounter a crisis which ends up revealing to the woman that marriages can have patterns of ups and downs over time. (5/5)

9. The Salt Garden - I think I liked this even better than the last story. Very complicated relationships going on here. First of all the narrator, Alma, has visions of the nuclear explosion (this was written during the Cold War), she also fantasizes about how she and her daughter would survive the end of the world as we know it. Meanwhile, Alma is having an affair with her own husband, as he secretly slips out to meet her away from the girlfriend he is living with. At the same time, Alma has a lover, whom she cares for deeply and her husband knows about. Ultimately Alma would be perfectly happy if things could stay the way the way they were forever. She likes having two men, but being the realist and doomsayer she is she knows they will eventually want change one way or another, or their other women will force it. What Alma fails to realize is that each man is hinting, gently implying that they want her, only her, but she mistakes these gentle proddings of the men trying to discover her true feelings for them as signs that they intend to break off with her. She is a negative person who seems to like having the constant threat of doom hanging over, but she isn't unlikable. An interesting story, to say the least! (5/5)

10. The Sin Eater - Another story I enjoyed. Somewhat different from the rest. A woman is telling us about her interactions with her therapist/psychiatrist (it's never really made clear). He eventually tells her the story of the sin eaters in Wales from long ago who would eat a meal upon the coffin of the deceased. I liked the therapist's methods and his attitude: Life sucks so we must find a way to deal with/cope with it rather than the common attitude of shrinks who say well life is what it is, this is what's wrong with you, now you must change or adjust. Joseph is an interesting man, nice, I liked him but in the end we wonder if he was using his patients for his own therapy. (5/5)

11. The Sunrise - A very readable story but I can only take away from it how incredibly sad and alone this woman is. I didn't really have feelings for her as a real person. (3/5)

12. Unearthing Suite - This is a relaxing, harmonious story with a theme of communing with nature. Not heavy-handed or really even eco-centred, mainly of living off the land from pure want. The narrator is the daughter of a couple; the wife is always on the move, agile, outdoorsy while the husband is some sort of biologist (scientist or teacher) that is never made clear, but he lives outdoors continuously at awe with the minute wonders of plant and small animal life. The daughter grew up this way, but she is inactive, a watcher her whole life. She sees herself continuing to live this way but questions will she be able to make the move from bystander to participant? A pleasant, atmospheric mood to end this collection. (4/5)