Dear Canada: A Desperate Road to Freedom: The Underground Railroad Diary of Julia May Jackson, Virginia to Canada West, 1863-1864 by Karleen Bradford 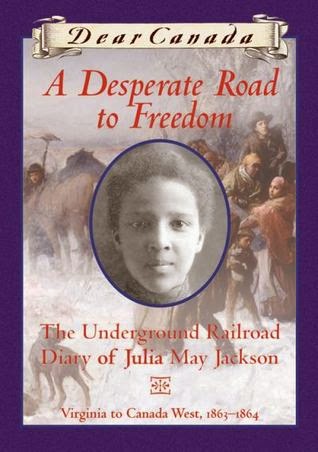 A Desperate Road to Freedom: The Underground Railroad Diary of Julia May Jackson, Virginia to Canada West, 1863-1864 by Karleen Bradford

Karleen Bradford is a well-known and talented Canadian historical fiction writer for youth and teens. Needless to say, this is an entertaining and interesting addition the Dear Canada series. This particular book could be best suited to the younger end of the 8-12 age range as it is a basic story of American slaves escaping using the Underground railroad, then the troubles and successes they experience settling down in a community in Canada. The majority of the book takes place in Owen Sound, Ontario. The only weakness is that this story only barely touches upon the horrors the slaves endured and the 'escape'/Underground Railroad part of the story is over by page 25. The rest of the book deals with their Canadian experience. Bradford does manage to cover many topics in this presupposing book: the eldest brother joins the Union army once he reaches freedom, the family had three older children sold off and that effect on the family is pursued, the blacks are welcomed seemingly so open-armed at first but later a white attitude of jobs being lost to them starts to prevail, friendships between white and black children, integration between the races in general but only to a point of "knowing their place and limitations" and also the kidnapping of free slaves by bounty hunters because of the US Fugitive Slave Law. The historical note is a simple history of the Civil War, the underground railroad and the black communities in Toronto and Owen Sound. A good, well-written, atmospheric, introduction to the topic.