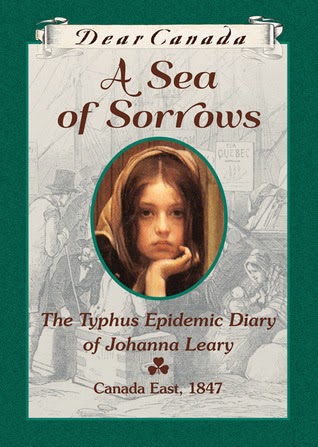 A Sea of Sorrows: The Typhus Epidemic Diary of Johanna Leary, Canada East, 1847 by Norah McClintock


Absolutely one of the BEST books in this series. It was surprising for me to find that McClintock, famous for her YA mysteries and thrillers, was the author. This is her first historical fiction and her reason and connection to the genre is explained in the author's note; I certainly hope she offers us more. This is a story of the Irish Potato Famine from boarding the ship until one year later in Canada. The book takes place first on the ship then in Montreal and finally ends in Sherbrooke. The book concentrates on the devastating hardships the Irish faced during this time when they turned to Canada for a new life and instead found disease, death and profound prejudice. Johanna tells her story as she struggles with losing her family, working as a servant and being called lazy, filth to her face. The book is suited for the upper age range of this series as it is powerful and deals heavily with death, of children, over and over. Irish literature is often known for its moroseness and McClintock has followed suit with this story. The ending makes the tough going worth the read though. A well-written, emotional period piece.