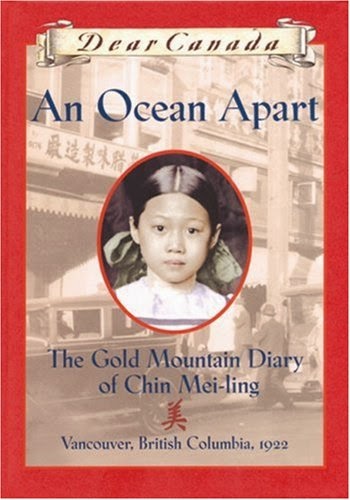 
A fine entry into the Dear Canada series. This author, Gillian Chan, is new to me so I didn't know what to expect in regards to the writing but was pleasantly pleased to find an engaging, well-written story. This "diary" is not about a particular incident but focuses in on the Chinese experience in Canada post World War I. This is a time when the country had immigration laws imposed upon the Chinese in particular so that while it had an influx of men, who had worked on the railway in the previous forty years or so, the government was at work to limit new Chinese from entering the country by imposing immigration fees and head taxes eventually up to $500 on each individual, even babies. This is where we find our main characters, a community of Chinese men, related in various ways from young to old, who are all saving up to bring back wives, children and parents. Mai has been brought over by her father, which is rare for a daughter to be treated so and the only thing a bit unbelievable about this book, but one must assume it was indeed done at times, though sons and wives would have been ahead of a daughter in most circumstances. A touching and realistic look into life for Chinese-Canadians at this period in time but Chan doesn't limit herself there. She also shows the intolerant nature between the races of that society with Mai's Irish Catholic best friend being a target for school teasing and her family for contempt. At one point the teacher makes a plea [I'm paraphrasing] of how he can't understand the necessity for the children to concentrate on where they came from. Why the gangs of boys? British against Portuguese? Italian against Irish? Dutch against Spanish? etc. Mai makes note that there are not enough Chinese boys to make a gang. A good read, I enjoyed this one and it serves a good purpose within the series itself.