Dear Canada: Pieces of the Past: The Holocaust Diary of Rose Rabinowitz, Winnipeg, Manitoba, 1948 by Carol Matas 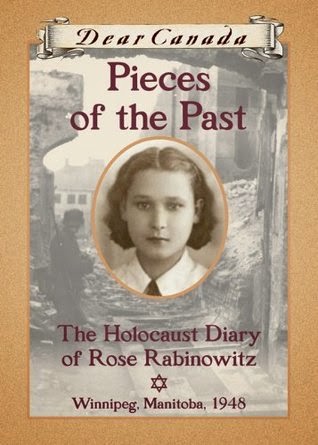 Pieces of the Past: The Holocaust Diary of Rose Rabinowitz, Winnipeg, Manitoba, 1948 by Carol Matas

I knew this would be good when I noted that Carol Matas was the author. One always has to look to the title page to find the author on these books, so it's like a hidden treasure when you see a favourite author there. This is an outstanding book in the series and really adds to the collection and children's Holocaust stories in general by its topic and the way it's presented. From a Canadian pov the book concerns a fictional Polish Jewish orphan who has emigrated to Manitoba, Canada and her diary entries always start with a little bit about what life is like for her now in the new country. The majority of the book, though, is about her writing down her memories, with the help of other Polish orphans at a monthly meeting place, as she remembers what happened to her during the war. Being only five at the start of Poland's Nazi invasion her story becomes clearer the older she becomes in her retelling. At one point a cousin finds her through a letter, who has settled in the new state of Israel and through this and the local news Matas also brings to the table the beginning of the settling of Israel and the immediate fighting between Israel and Palestine from day one that continues to this very day. This book is most suitable for the upper ages of the Dear Canada's age range of 8-12 as Matas does not pull any punches in her writing; she never does. While keeping the information age appropriate she does impart the horrors and terrors that occurred during this bloody, hateful period in world history. Rose's diary in the end becomes a record of the death of each member of her immediate family and also contains a strong religious flavour. As usual I greatly enjoy the end matter in this series which starts with an epilogue that briefly wraps up the lives of the fictional characters. This is followed by an in depth historical note about the events surrounding the time period in which the story takes place and finally ends with photographs from the era. There are some stunning pictures of the Polish Ghetto and Resistance Fighters here. The book also mentions several times a fact that is not publicized enough in my opinion, in fact I only learned of it some years ago myself, that Canada and the other Allied countries refused Jewish immigration during the war years and even after the war it took much too long, in my opinion, for Canada to open up it's Immigration to the Jews. This story concerns the 1947 immigration policy which allowed 1,000 European Jewish children into Canada on the assumption the Canadian Jewish Congress took full responsibility for them. A must read.