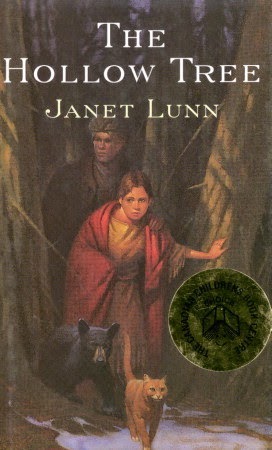 
This is the third book in a trilogy that I believe only has the connection that they take place in the same geographic area at some point. I read this book before a very long time ago but did not remember it as I re-read it this time. It's a bit slow to get into and not exactly a page-turner story. The plot is quiet and meandrous even though an adventure and mission is taking place. We are privy as much as to what is taking place inside Phoebe's thoughts as to what is happening to her physically. It is still a refreshing approach to the American War of Independence. The characters in the book are Loyalists who have to flee from their homes to Canada after being made to leave by the rebels, some violently others just forcibly. However, the main character, Phoebe, is neutral. Her freedom loving professor of a father leaves to fight for the rebels and gets killed the first year. At 13 she moves across the creek to her Aunt and Uncle's house. The Uncle is a pacifist, but his eldest son is Loyalist and goes off to fight for the King. Needless to say he suffers a gruesome end. Phoebe, now 15, goes across the country on her own, followed by a stray cat and bear cub, to complete her cousin's mission because she is loyal, loyal to family, not any side in any war. The book heavily portrays the terrible ways that neighbour turned against neighbour and the Loyalists were, any combination of, kicked out of their homes, property and chattel stolen, beaten, tarred and feathered, women and children with husbands gone off fighting were kicked out in the middle of the night with virtually nothing but their horse and cart and a bag of flour. Young men accused of being Loyalist were hanged and after the war these refugees hiding out in Canada were not allowed back into the new Independent America. The book also heavily focuses on that even while there was a war going on and many angry people had taken sides, just like in all wars anywhere, there were just so many people who really had no side, couldn't care less who won, just wanted their homes back, their towns to be safe, to be neighbourly again and their loved ones back home alive and hopefully in one piece. Even though I found the pacing slow, it is an enjoyable story with an exciting journey of survival across country and populated mostly with female characters.