Dear Canada: A Country of Our Own: The Confederation Diary of Rosie Dunn, Ottawa, Province of Canada, 1800 by Karleen Bradford 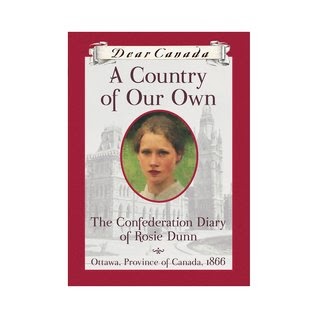 A Country of Our Own: The Confederation Diary of Rosie Dunn, Ottawa, Province of Canada, 1800 by Karleen Bradford

I always look at the author first for these as some are long-time favourites and I know I'm in for a treat for those. This author, Karleen Bradford, I'd heard of and knew I had read a book by her but it wasn't until now that I've checked to see it was a book from a very long time ago about time travel back to the War of 1812 "The Other Elizabeth". I do have a fond remembrance of it. This was an entirely enjoyable book, written in journal format as usual for the Dear Canada series. Most children's books I read about Confederation take place in PEI but this one is a little unusual in that it takes place mostly in the time leading up to Confederation and takes place in Ottawa. It concerns a young girl who has been hired into service for a family in politics in "Eastern Canada" (renamed Quebec when it joined Confederation)who must move to Ottawa now that the Queen has named it captial city of the newly formed province of Canada (East & West combined). Ottawa is a ramshackle little town with small wooden houses, and mud streets that pigs and cows wander freely. The story mostly concentrates on day-to-day life as seen through the eyes of an Irish-Catholic servant girl but also her impressions of the daily life of her well-to-do employers. The political background concerns the thoughts pro and con for uniting the provinces into Confederation and the process that was involved during that full year leading up to Confederation. The book ends just after the celebration of the first Dominion Day July 1, 1867. Two historical figures are mentioned quite frequently Sir John A. MacDonald and Thomas D'arcy McGee. The main character, Rosie Dunn, is entirely likeable and makes for an interesting voice. The story is full of small crises making for an enjoyable plot, as well as an interesting historical piece. I really liked Bradford's writing and would easily read another book of hers.