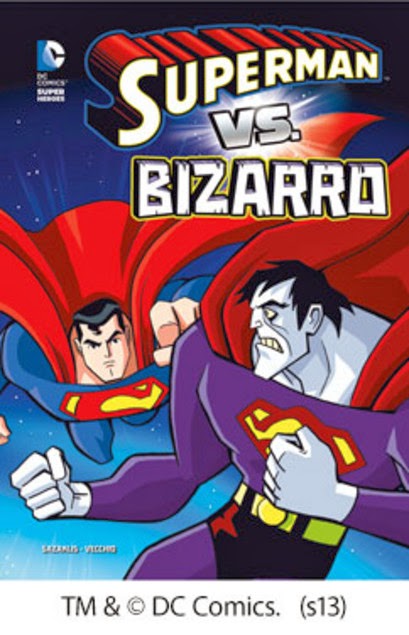 "Bizarro is back! This backward version of Superman has plans to remake the Earth in his own image, and he's not taking No--or, is that Yes?--for an answer. Can the Man of Steel save the day before this evil opposite turns Earth into an alternate reality?"

I'm a big fan of this easy chapter book series featuring DC superheroes and villains.  Full of action, fun to read and use of colour and crazy fonts on sound affect words give these chapter books a comics feel.  The title is a bit off on this one.  Bizarro is treated like the mentally challenged relative in this story and that doesn't quite rub me the right way. The real villain here and the "vs" of the title is really Metallo, a giant robot who is always after Superman and when he finds two, that's even better than one as far as he's concerned. 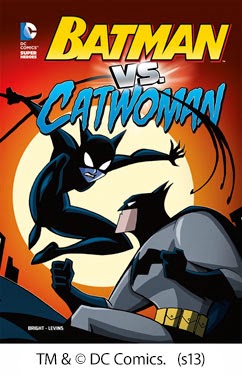 "When a priceless, jewel encrusted bird statue is installed atop a skyscraper in Gotham, Catwoman has her eyes--and her claws--on the prize. But when she puts her paws on the curious statue, this feline gets caught up in the Penguin's foul power play."

Received a review copy from the publisher, Capstone Publishing.

I like this series and this latest entry is a fine example of it at its best.  A fast-paced action plot that portrays the superheroes/villains well.  Catwoman isn't really the villain in this book though she starts off by trying to rob the Penguin when Batman first confronts her.  Catwoman gets her back up and the two are battling from the get-go, but soon afterwards Catwoman escapes and finds out the Penguin is about to destroy Gotham so she and Batman team up against Copplepot and the fighting action never stops.  Purely plot driven, but Bat, Cat and Penguin are true to character throughout.  Will keep young readers or DC fans entertained.  Tim Levins is a veteran DC artist, which makes for rewarding illustrations.
Labels: 2013 early chapter books MG superheroes