28. The Sandman and the War of Dreams by William Joyce 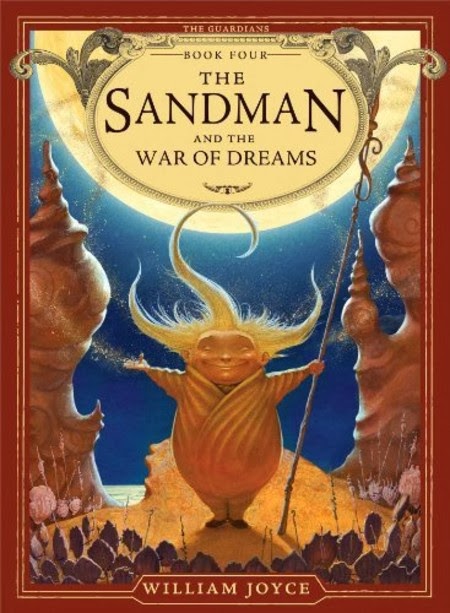 "When the Man in the Moon brought together the Guardians, he warned them that they would face some terrible evils as they strove to protect the children of earth. But nothing could have prepared them for this: Pitch has disappeared and taken Katherine with him. And now the Guardians are not only down one member, but a young girl is missing.

Fortunately, MiM knows just the man to join the team. Sanderson ManSnoozy—known in most circles as the Sandman—may be sleepy, but he’s also stalwart and clever and has a precocious ability to utilize sand in myriad ways. If the other Guardians can just convince Sandy that good can triumph evil, that good dreams can banish nightmares, they’ll have themselves quite a squad. But if they can’t…they might never see Katherine again"

I absolutely LOVE this series and was sooo excited to read this next volume.  If you've read the last book, the picture book "The Sandman" then you've already met Sanderson Mansnoozy and know his background story.  This book starts with current events but it does retell his background so you don't need to have read the picture book, but who would want to miss such a beautiful book?!  This is just such a fast-paced adventurous story where I absolutely heart all the characters that I made myself take two days to read it.  I read half one day and finished up the next, just so I could savour and linger over the story.  There aren't very many top-notch fantasy novels/series for the 7-11 age group and this is up there with the first Spiderwick Chronicles in my opinion.  The illustration is just as appealing as the text.  I do want to warn readers though to *stay away* from the movie.  It has absolutely nothing to do with these books, this series, AT ALL.  It doesn't even have the same characters!  Well, the characters look the same and have the same names but they are not the same characters as known in the books.  So think of the books and the movie as two separate and non-related entities.  But read this series.  Adorable elementary fantasy.
Labels: 2013 children fantasy MG