26. The Future of Catholicism by Michael Coren 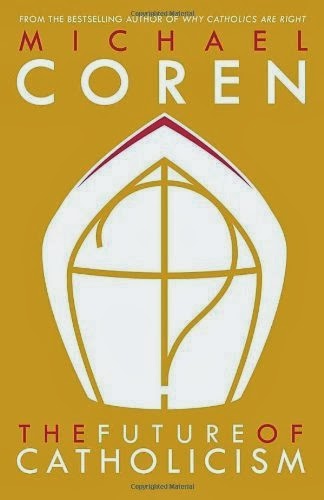 The Future of Catholicism by Michael Coren  (buy)

"From the author of the bestselling Why Catholics Are Right, a perfectly timed book on the new Vatican -- where it is, where it needs to go, and why it is more relevant than ever.

When Cardinal Jorge Mario Bergoglio, Archbishop of Buenos Aires, became Pope Francis in March 2013, there were almost 6,000 journalists in Rome to cover the Papal election. Some of them reported on the conclave with expertise and empathy, but others -- either out of ignorance or an agenda -- insisted on asking the same questions again and again: Is the Church going to change? Will the new Pope be flexible? Is Catholicism going to adapt to the times and alter its teaching on same-sex marriage, abortion, contraception, female ordination, celibate clergy, and divorce? Interestingly, these questions center on moral and sexual issues rather than directly theological topics, but they are all based on the premise that the Church is wrong, outdated, in need of fundamental transformation.

Does the Church need to change, and if so, where? Where it cannot change, why is this so? In his signature frank style, Coren will explain and outline why the Church believes as it does on many of the most pressing moral issues, giving reasons for teaching and belief, and applying these to contemporary challenges. And for those areas where the Church must change and establish reform -- the transparency of leadership and finance; the competence of the curia and Vatican civil service; the approach the Church takes towards media, the way it deals with the detritus of the abuse crisis; and its approach to the developing world band towards others religions, particularly Islam -- Coren will offer insight into the faith's next steps.

I didn't actually finish this.  I stopped 2 chapters from the end but I feel I've read enough to review the book as I have read, and immensely enjoyed, Michael Coren's previous two  books on Catholicism/Christianity.  I found this a chore to read though and just sighed and closed the book upon the final two chapters.  I'm a practicing Catholic and found that I knew everything this book had to say and that most of it was a repeat of what Coren had to say in his previous books.  I'm not really the intended audience for this book and is felt like "preaching to the choir".  Coren is very good at telling it like it is though and he accomplishes what he sets out to do here.  If you don't understand why the Catholic Church teaches what it does and why it can and cannot change certain things it practices this book will explain that to you.  If you want to understand how Pope Frances is different but why he is not really all that different this book will explain that to you.  One thing the Catholic Church can never be is Protestant.
Labels: 2013 Canadian author catholic non-fiction theology