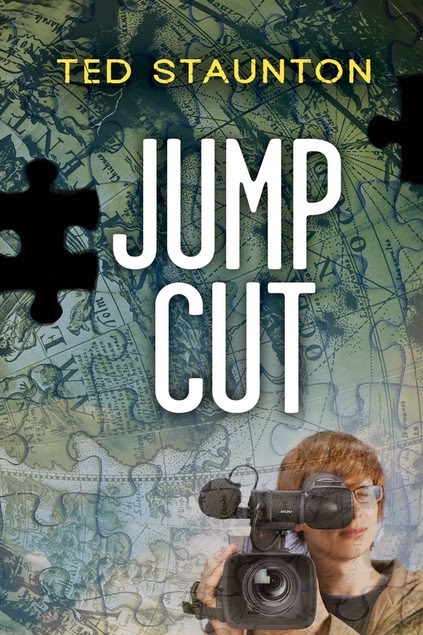 "Spencer loves movies, but real life is boring, right? When his late grandfather's will reveals the tasks he wants his grandsons to undertake, Spencer thinks he got screwed. He's not going to France or Spain or Africa. He's not even getting a cool tattoo, like his younger brother. No, he's going to Buffalo to get a kiss from an ancient movie star. Gross. And he's supposed to film it. Grosser. But Spencer hasn't bargained on Gloria Lorraine, star of the silver screen back in the day. Gloria has big plans—plans that involve her granddaughter AmberLea, a gun, a baker who might be a gangster, some real gangsters and a road trip to Nowheresville, Ontario. After being shot at, jumping into an icy lake and confronting some angry bikers, Spencer finally realizes that real life can be as exciting (and dangerous) as reel life.."

This is the fifth book I've read in this series and, while I'm highly pleased with series as a whole, at this time I can fairly say this has been my favourite title to date and may be the best in the whole series.  I do still have Shane Peacock's entry to read, though, so I'll reserve final judgement till then.  Hooked from the beginning, this is a classic tale of boy's adventure.  The main character is 17yo film director wannabe Spencer and his quest from the Grandfather involves filming his task.  Filmmaking, movies, the "pictures" is a major theme here and the book reads as if it is a movie.  Pure action from start to finish, with admittedly over-the-top events accumulating on top of one another.  One has to suspend belief for this tale, but it is obvious the author has written the plot like this on purpose as real life is compared and contrasted to movies frequently.  Involving hidden secrets from the past, drug deals, bikers, mafia and a race against time, I found this story to be both exciting and good fun. The events of this and Ink Me are tied to one another, in that what is happening in one affects the plot of the other, but this is conveyed to the brothers through texts and it won't matter which one you read first.  Though having already read Ink Me, I completely understood what was happening with that aspect of this plot.   It's wonderful to read a book where you love all the characters and here I certainly did, right down to the dog, Mistah Bones.  And GL, the grandma?  Let me say, everybody is going to want to go out and get themselves a 90yo grandma after meeting her.  Staunton is a new author for me.  I've only just read his latest book "Who I'm Not" and look forward to his further ventures in Young Adult action/suspense.

I have two books left in the series and since no connection was made to either of them with this one, I'm going to choose "Devil's Pass" next just so I can save Shane Peacock's (a favourite author of mine) for last.
Labels: 2012 Canadian author realistic fiction thriller YA