10. Typhon and the Winds of Destruction by Joan Holub 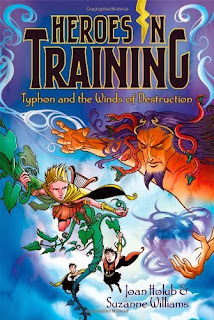 Typhon and the Winds of Destruction by Joan Holub & Suzanne Williams. Illustrations by Craig Phillips (buy)
Heroes in Training, #5

"After battling fireball-throwing Titans, the young Olympians find themselves on a double quest: Not only must they find more Olympians that Cronus has swallowed, but they’re also in search of magic seeds that will help rejuvenate the earth after the terrible drought that plagued the lands, thanks to Hyperion. But a wind-throwing giant named Typhon has other ideas. Can the Heroes in Training withstand the storms that are coming their way?"

I love this series but found this one not quite up to par with the rest of the series to date; though it was still a decent entry.  The title names itself after the villain fought in this quest and Typhon is a giant with mighty strength keeping another Olympian prisoner.  On the quest for the magic seeds, a very similar Jack-in-the-beanstalk type story is used to tell the tale of how they rescue the next Olympian to join their group and the magic seeds are given to a different member .  The story starts with action and never lets up till the end; not much character development is added to the existing personalities as they are all too busy *doing* this time around.  The character comes in right at the end so we won't get to know them until the next book, however a big reveal about the other Olympians is disclosed at this point.  Full of action and excitement but lacking a bit in the humour department, "Typhon" is a good read; just not as much as the previous entries so far.  The next book will focus on the new character and I'm looking forward to its release.
Labels: 2013 historical fantasy MG myths