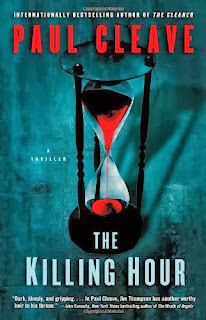 "Imagine waking up covered in blood—but it’s not your blood. There’s a nasty bump on your head, and you can’t remember a thing about last night. The morning paper reports that two young women were brutally murdered. You recognize their names. Pieces of the night before come back to you through the haze. And now you’re the suspect in their grisly deaths. Welcome to Charlie’s world.

In this heart-pounding thriller, only the dead know what happened last night. On the run, Charlie suspects a man named Cyris, but no one believes that Cyris exists. Not the police and not Charlie’s ex-wife Jo, though she wants to trust that the man she once loved is innocent. Soon, Charlie has Jo bound and gagged in the trunk of his car, fleeing across the countryside while the killing hour approaches yet again."

Originally published in 2007 in the author's native New Zealand, Cleave starts this first US edition with an Introduction explaining this book's origins which is informative for a reader interested in Cleave's work from a chronological point of view.  It was enlightening to me and my read of this book which was actually his first written but second published.  Not nearly as good as "The Cleaner", lacking the fine-tuning of that thriller, this is nevertheless still an engaging mystery that had me baffled the entire time.  I could not for the life of me figure out what was going on and that kept me reading and turning the pages even through the parts that got a bit dull.  The story is on high-powered overdrive from the get-go and Cleave does have some spots where he is unable to hold the adrenaline and as mentioned it becomes dull, but the unique plot keeps it moving over these humps.  As to being part of a series, it really is a stand-alone.  There is mention of the case from the first book and the same detective is in charge of both cases, though he is not a major character in either book.  Mention is also made of the Private Detective who will be featured in the next few books and which forms another sub-series within Cleave's overall Christchurch mystery series.
Labels: 2007 2013 mystery thriller