413. The Great Houdini by Monica Kulling. 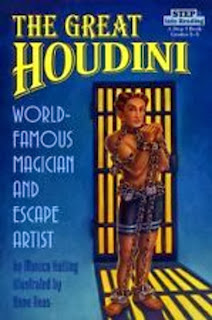 "Harry Houdini was a great escape artist, but perhaps his greatest trick was becoming the famous magician that we have come to know. As a child, Houdini worked hard--and even quit school--to help support his family. But his dream always was to become a great magician and performer. He practiced day and night, thinking up new tricks and more and more dangerous stunts. His intense ambition paid off, and soon Harry Houdini became known worldwide! This kid-appealing Step 4 traces Houdini's life from his poor beginnings to his eventual success as the most famous mystical magician and escape artist of all time."

Monica Kulling has written several biographies in this easy reader series and she has a deft hand relating an entertaining story of a person's life in a manner that will make kids curious about these people.  Houdini is a larger than life figure who has an interesting story to hear.  His feats are exciting even today and this is a well-written short chapter book that focuses mainly on his career as an escape artist.  The book is nicely illustrated and there are two actual photographs as well, which help make the man seem even more real to the modern child.  I don't think I ever realized this before but Houdini has a Canadian connection in that the fatal punch that ended his life happened in Montreal.  A recommended book in the series.
Labels: 1999 biography Canadian author children early chapter books