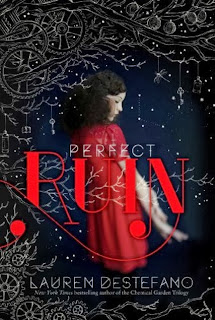 "Morgan Stockhour knows getting too close to the edge of Internment, the floating city in the clouds where she lives, can lead to madness. Even though her older brother, Lex, was a Jumper, Morgan vows never to end up like him. If she ever wonders about the ground, and why it is forbidden, she takes solace in her best friend, Pen, and in Basil, the boy she’s engaged to marry.

Then a murder, the first in a generation, rocks the city. With whispers swirling and fear on the wind, Morgan can no longer stop herself from investigating, especially once she meets Judas. Betrothed to the victim, he is the boy being blamed for the murder, but Morgan is convinced of his innocence. Secrets lay at the heart of Internment, but nothing can prepare Morgan for what she will find—or whom she will lose"

Lauren DeStefano does it again!  The Chemical Garden trilogy was so good, I wondered whether her next book would live up to it and with Perfect Ruin she has set up the beginning of another truly unique dystopian future.  On Internment, DeStefano deals with current issues which are often brought up in dystopian literature, in fact she seems to bring them all up: forced abortion, eugenics, population control, ageist euthanasia and a routinely medicated society.  All the while for the inhabitants it might as well be a happy little place to live except for the disturbing lure of the edge which inevitably kills or maims those who get caught in its attraction.  A quick, page-turning read with genuinely interesting characters.  In this book there is no character defined as the "bad guy" as the King is just a ruler in his tower at this point. I really enjoyed this and while dystopian in nature as her previous books, the author ha gone out in a completely different direction making this series unique from the other.  The only thing that annoyed me a bit is that the ending is decidedly a cliffhanger (literally ending with a jump, don't worry not a spoiler, just a pun for those who've read the book LOL).  I like books in series to be individual stories themselves with a finite ending, yet remaining part of the whole series.  Cliffhanger endings don't impress me but I didn't find this one frustrating as it was more anti-climatic so I'm not docking points.  A good solid, unique, fun 5 star read.
Labels: 2013 dystopia mystery science fiction YA