368. The Cleaner by Paul Cleave 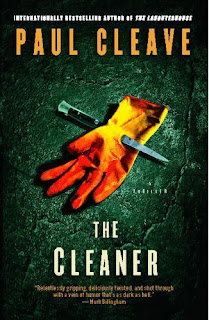 "Joe is in control of everything in his simple life—both his day job as a janitor for the police department and his “night work.” He isn’t bothered by the daily news reports of the Christchurch Carver, who, they say, has murdered seven women. Joe knows, though, that the Carver killed only six. He knows that for a fact, and he’s determined to find the copycat. He’ll punish him for the one, then frame him for the other six. It’s the perfect plan because he already knows he can outwit the police.

All he needs now is to take care of all the women who keep getting in his way, including his odd, overprotective mother and Sally, the maintenance worker who sees him as a replacement for her dead brother. Then there’s the mysterious Melissa, the only woman to have ever understood him, but whose fantasies of blackmail and torture don't have a place in Joe’s investigation."

This is Paul Cleave's first book; it is also the direct prequel to Joe Victim, his latest book which I read recently.  Since I read the books the wrong way round I knew all the who-dunnits in this book but did not know the whys or hows.  This did affect my enjoyment of the book and I do highly recommend you read the two books in the proper order!  However, I enjoyed Joe Victim so much I just had to read the beginnings of his story.  This (well both books) is a very unique take on the serial killer book as it is almost entirely told from the killer's point of view and we hardly even get to know the police investigators in this first beginning book.  They have developed into characters by the time we get to the latest book, Joe Victim, the 7th in the series, though.  But here, they show up occasionally and mostly through Joe, the cleaner's, point of view.  The scary thing about this story is that even with the entire violent, ruthless murders we are somehow drawn to Joe and he does become an unwillingly sympathetic character to the reader in an unsettling way to my dismay, even though he is completely unlikable as a person and unreliable as a narrator.  Occasionally another narrator will take over and we get an outsider's take on the case, but as I said this is not from the police themselves; they are kept as background characters making this a very unique style of thriller which I thoroughly enjoyed.  I just didn't get the full impact since I had already read the sequel which keeps no secrets of the events that happen here.  I'm impressed with this author and will move on to his next book which revolves around the same police department in Christchurch, NZ.
Labels: 2006 mystery thriller