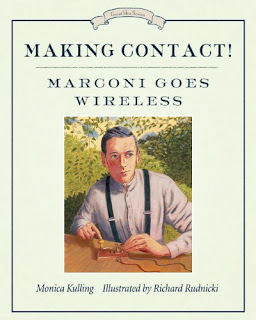 " The fifth book in Tundra's Great Idea Series, Making Contact! tells the story of Guglielmo Marconi, who became the father of wireless communication.

As a boy, Marconi loved science and invention. Born in 1874 in Bologna, Italy, to a wealthy family, Marconi grew up surrounded by books in his father's library. He was fascinated with radio waves and learned Morse code, the language of the telegraph. A retired telegraph operator taught him how to tap messages on the telegraph machine. At the age of twenty, Marconi realized that no one had invented a wireless telegraph. Determined to find a way to use radio waves to send wireless messages, Marconi found his calling. And, thanks to his persistence, on December 12, 1901, for the first time ever, a wireless signal traveled between two continents. The rest is history."

Received a review copy from the author.

I love picture book biographies and this series from Canadian author Monica Kulling is one of my favourites.  This time she features someone more well-known than in the previous books but the invention will be unusual to children of today and yet it will show them the simple beginnings of today's "wireless" technology.  Marconi's story is not particularly exciting but it shows the determination of someone who studied for the joy of it as a child (at home, with tutors) and who had perseverance as a young man to realize the dreams he believed in even when they are slow to be fulfilled.  This book brings with it a new illustrator to the series and I just loved Rudnicki's attention to style and detail, especially the patterns and designs on clothing and fabric.  Another satisfying entry in the Great Ideas series!
Labels: 2013 biography Canadian author children history picture books Victorian