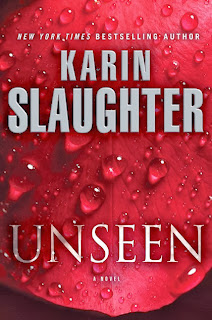 "Will Trent is a Georgia Bureau of Investigation agent whose latest case has him posing as Bill Black, a scary ex-con who rides a motorcycle around Macon, Georgia, and trails an air of violence wherever he goes. The cover has worked and he has caught the eye of a wiry little drug dealer who thinks he might be a useful ally. But undercover and cut off from the support of the woman he loves, Sara Linton, Will finds his demons catching up with him.

Although she has no idea where Will has gone, or why, Sara herself has come to Macon because of a cop shooting: Her stepson, Jared, has been gunned down in his own home. Sara holds Lena, Jared’s wife, responsible: Lena, a detective, has been a magnet for trouble all her life, and Jared’s shooting is not the first time someone Sara loved got caught in the crossfire. Furious, Sara finds herself involved in the same case that Will is working without even knowing it, and soon danger is swirling around both of them.

In a novel of fierce intensity, shifting allegiances, and shocking twists, two investigations collide with a conspiracy straddling both sides of the law. Karin Slaughter’s latest is both an electrifying thriller and a piercing study of human nature: what happens when good people face the unseen evils in their lives."

I love Karin Slaughter's books!  Having read every single book in this series from the beginning of the Grant County Days I can say that as a reader Slaughter sometimes majorly peeves me off with where she takes her characters but after reading this one, I am soooo pleased with where she has left things.  First of all, I was thrilled to see Lena back for this novel as she is my favourite character and has been since the beginning.  I think she's gotten a bum rap and stupid Sara's jealous and vindictive boisterous opinions have helped seal that fate.  However, Lena's vindication is the ultimate story here and I loved it!  She and Sara have a verbal cat fight which had me cheering them on.  Will and Lena are the main players in this story with Will's partner Faith coming into equal play as well.  Sara doesn't become a layer until well into the book.  The mystery was a good one, but unfortunately I had the unsub picked out very early on.  Still it was fun to watch it all unravel.  Amanda hhas very little play in this book which I think is a good move since the last book was devoted to her.  A great ending, not everyone comes out unharmed, but I like the places the main characters are in and it feels good that the future holds room for both Will and Lena.  Go Karin Slaughter!!
Labels: 2013 mystery thriller