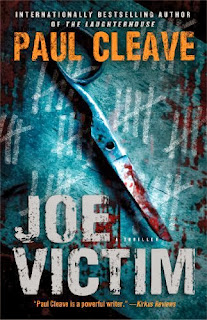 "Joe Middleton’s story is this: He doesn’t remember killing anyone, so there’ s no way a jury can convict him of serial murder. He calls himself Joe Victim, trying, as he awaits trial, to convince the psychiatrists that he wasn’t in control of his actions trusting that the system will save him in the end.

But others know Joe as the infamous Christchurch Carver and they want to see him dead. There’s Melissa , Joe’s accomplice in one of the murders, who plans on shooting him on his way to the courthouse before he gets a chance to start talking. Then there’s Raphael, whose daughter was one of the Carver’s victims. Though he’s tried to move on with life as the leader of a counseling group for grieving family members, he’d like nothing more than to watch Joe pay. Finally there’s Carl Schroder, the ex-detective who locked Joe up and is determined to put things right for the case of his career.

To extract himself from this epic mess, Joe has come up with a desperate plan involving a television psychic who’s looking to get rich by making people believe just about anything. It’s a long shot, but it had better work before he becomes the poster boy for a death penalty that may be reinstated in New Zealand, which isn’t quite the dramatic ending his is hoping for".

This is the very first book I've read by Paul Cleave. (Don't you just love that name for a serial killer writer!)  The book itself is a direct sequel to the the very first thriller he wrote set in Christchurch, New Zealand and is his seventh thriller set in that city.  From what I can gather, there is a small series running within these books, this not being one of them, but all the books do take place in the same city, the same police force and within the same timeline so references are made between them.  Characters know each other etc.  This sounds entirely exciting to me and I'd love to go and read his books in published order.  Not having read any of the other books, I didn't have any problem jumping in with this one, much background information was given to fill us in or refresh readers minds.  Being a serial series reader though, I am more than certain I would have loved getting all the insider references.  The story was great and very intense and creepy.  This one is told half the time through the killer's point of view and he is the one in danger this time making him a creepily sympathetic character at times. Yuck! but true...  I was fascinated that the book took place in NZ and found the cultural and police procedures to add another dimension to the story when I'm so used to American/British (OK,Scandi) crimes all the time. .An intense look inside the mind of a psychopath that I enjoyed very much but would probably have to recommend reading, at least, the sequel to this book first, "The Cleaner".  I'll be going back and reading it myself!   I think I may have found a new favourite author. Duh-duh-DUH!