305. Between Heaven and Earth by Eric Walters 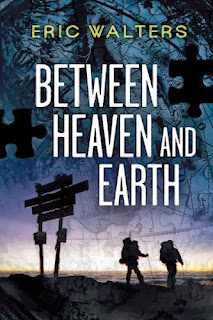 Between Heaven and Earth by Eric Walters
(Seven: The Series)

"DJ is David McLean's eldest grandson, so it stands to reason that he be the one to scatter his beloved grandfather's ashes. At least that's how DJ sees it. He's always been the best at everything—sports, school, looking after his fatherless family—so climbing Kilimanjaro is just another thing he'll accomplish almost effortlessly. Or so he thinks, until he arrives in Tanzania and everything starts to go wrong. He's detained at immigration, he gets robbed, his climbing group includes an old lady and he gets stuck with the first ever female porter. Forced to go polepole (slowly), DJ finds out the hard way that youth, fitness level and drive have nothing to do with success on the mountain—or in life."

This is the second book I have read in this series that proposes that its books can be read in any order.  I chose this book because it was about the brother of the boy in the first book I read, Lost Cause.  I have to say I probably enjoyed this one more, though they are quite different books; Lost Cause being very historical and Walters' book is pure adrenaline outdoor adventure.  About mountain climbing, DJ, the eldest grandson at 17 years old is quested to climb Mount Kilimanjaro.  Full of action, before he even hits the foothills, DJ is arrested on suspicion of drug smuggling and later has his belongings stolen by street kids.  The mountain climb is exciting and will mostly appeal to boys owing to a marked emphasis on altitude sickness and the accompanying abdominal irregularities.  There is very little connection with this book and the other grandsons' quests occurring in the accompanying books; Lost Cause had much more interaction, naturally leading me to this book about DJ.  From this book there is no discernible suggestions as to which book would make a likely next choice so I'll just pick whichever takes my fancy at the library.  As to the author, I have not read Walters before.  I always get Canadian authors Eric Walters and Eric Wilson (whom I *have* read many of his teen mysteries) mixed up so I wasn't sure which one this was until I looked at his bio.  I really enjoyed the writing style though and would like to try his other work as he is quite lauded for his books aimed at male teen readers.
Labels: 2012 Canadian author sports YA