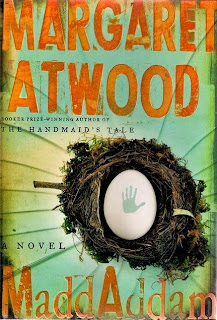 "Months after the Waterless Flood pandemic has wiped out most of humanity, Toby and Ren have rescued their friend Amanda from the vicious Painballers. They return to the MaddAddamite cob house, which is being fortified against man and giant Pigoon alike. Accompanying them are the Crakers, the gentle, quasi-human species engineered by the brilliant but deceased Crake. While their reluctant prophet, Jimmy -- Crake's one-time friend -- recovers from a debilitating fever, it's left to Toby to narrate the Craker theology, with Crake as Creator. She must also deal with cultural misunderstandings, terrible coffee, and her jealousy over her lover, Zeb.

Meanwhile, Zeb searches for Adam One, founder of the God's Gardeners, the pacifist green religion from which Zeb broke years ago to lead the MaddAddamites in active resistance against the destructive CorpSeCorps. Now, under threat of an imminent Painballer attack, the MaddAddamites must fight back with the aid of their new found allies, some of whom have four trotters.

At the centre, is the extraordinary story of Zeb's past, which involves a lost brother, a hidden murder, a bear, and a bizarre act of revenge."

Wonderful!  All the characters from the first two books come together in this final book of the trilogy which moves the plot forward showing us the present situation of the world and how the remaining humans and the genetically altered humans and animals are existing together.  The second book, The Year of the Flood, is the weakest in the trilogy but I very much enjoyed those characters' return in this story.  They were familiar faces and their characters were wonderfully developed in this book.  It was also fantastic to finally get to know the "Crakers" so well, and a very important character develops from that group.  Tension comes from the threat of three Painballers, gladiator-type survivors from a fight-to-the-death reality show, pre-Apocalypse.  I was pleased to find no heavy emphasis on the eco-nonsense here and found Atwood's vision of her post-apocalyptic world quite plausible.  I always enjoy Atwood's writing whether I'm thrilled with her books or not and this one is a page-turner that kept me glued to the book.  I still think Oryx and Crake is the best of the trilogy, but this is a satisfying conclusion to the story.