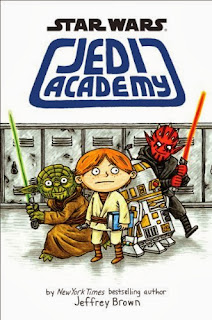 "This incredible, original story captures all of the humour, awkwardness, fun, and frustrations of middle school — all told through one boy's comics, journal entries, letters, doodles, and newspaper clippings. The setting? A galaxy far, far away . . .

Roan's one dream is to leave home and attend Pilot Academy like his older brother, father, and grandfather. But just as Roan is mysteriously denied entrance to Pilot School, he is invited to attend Jedi Academy — a school that he didn't apply to and only recruits children when they are just a few years old. That is, until now.

This inventive novel follows Roan's first year at Jedi Academy where, under the tutelage of Master Yoda, he learns that he possesses more strength and potential than he could have ever dreamed. Oh, and he learns other important things too — like how to make a baking soda volcano, fence with a lightsaber, slow dance with a girl, and lift boulders with the Force."

I absolutely loved this book!  Let me preface by saying I haven't read Brown's Vader books, and that's ok because this book is not part of that series.  I also am not a big Star Wars fan.  I love the original three movies but have no time for the others; in fact I don't think I've ever even read a Star Wars "tie-in" book before.  I was quite surprised that I enjoyed this book so much and I think it is due to the originality, which is hard to do with something as familiar as Star Wars.  The book is populated with entirely original characters, yes some are of familiar species ie Wookie, relatives of Hut, early R2, 3PO models, etc, but the only Star Wars character brought into play here is Yoda, who is portrayed very well and not over used.  The book reminds me immensely of "Wimpy Kid" but with more.  The book is written in a series of journal entries, graphic novel sections, letters, comic strips, school pages, posters, etc.  It is a visual feast and written in an easy-to-read handwritten print font.  Other than being Star Wars themed, set during main character Roan Novachez's first year at Jedi Academy, the plot and events are those faced by any average middle-schooler.  A delightful little read that has me wanting to follow Roan into his second year at the Academy!
Labels: 2013 children epistolary science fiction