280. The Hypnotists by Gordon Korman 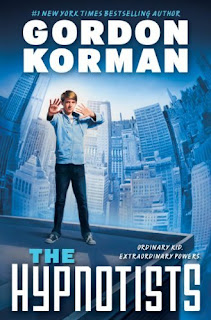 "Jackson Opus has always been persuasive, but he doesn't know that he's descended from the two most powerful hypnotist bloodlines on the planet. He's excited to be accepted into a special program at the Sentia Institute — but when he realizes he's in over his head, Jackson will have to find a way to use his powers to save his friends, his parents, and his government."

I can't believe I have never read a Gordon Korman book before.  An ex-patriot Canadian, he wrote his first book when he was twelve and hasn't stopped since.  He's one of Canada's most well known children's authors.  I've had the Bruno & Boots series on my "must get around to someday" list forever!  Finally I have the opportunity to read Korman's latest book and find I am well-pleased.  Quite a unique plot that uses some elements I've seen before but not pulled all together this way!  The book's  main theme is hypnotism and it is treated as an entirely scientific matter, brain activity to be stimulated that some people have more of than others.  Jax is a well-rounded hero and very likable.  A bit of an outsider, he finds his groove when he understands what his strange visions mean.  He's a bit slow on the uptake, with his friend Tommy figuring things out faster than he can, but other than that I enjoyed him very much.  I was engrossed with the story from the first chapter and read more than half the book in one sitting, finishing it in the next.  The political intrigue sub-arc reminds me of Steven King's Dead Zone in which the hero has to stop a politician from winning an election because it will lead to world destruction. Same thing goes here in "The Hypnotists" only on a lesser degree.  I liked the ending which wrapped up all the storylines and gave us a final complete ending to the problems encountered in this book.  One can walk away satisfied.  However, the characters are obviously on the brink of more troubles which we know will come seeing as this is labeled Volume 1.  Unique science fiction involving secret societies and underground institutes, should appeal to those who like conspiracy theories.