276. Hyperion and the Great Balls of Fire by Joan Holub 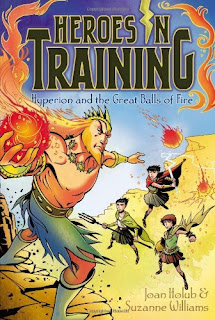 Hyperion and the Great Balls of Fire by Joan Holub & Suzanne Williams. Illustrated by Craig Phillips
Heroes in Training, #4

"Phew, it’s hot! Under the titan Hyperion’s rule, the sun is burning even brighter than normal and scorching everything in northern Greece—including the villagers! The Olympians are forced to play a sizzling “game” of Dodge the Sunbursts as Hyperion hurls giant fireballs that could fry them to pieces!

Armed with some clues, Zeus, Poseidon, and Hades set out to figure out why in the world Hyperion has been making things so hot. They also need to rescue Hera, who is still missing. Battling the extreme heat—and some fantastical and scary creatures, courtesy of their old foe Cronus—the boys are off on another epic adventure…and Zeus is one step closer to discovering his destiny."

Another great entry in this wonderful series for young chapterbook readers.  I'm really enjoying these books and look forward to each new volume.  This one is not my favourite compared to the previous three but it holds it own and progresses the story well.  As we can tell by the title of this one, the villain takes more of a major role this time around as the heroes search out their quest for another magical item and the last of their missing Olympians.  A fun story with lots, and I do mean a lot, of action.  Introduction to more Greek mythology and one I particularly like about this series is the emphasis on the Titans, which are often harder to understand.  Many children's books start with the Olympians, glossing over the earlier Greek mythology of their origins.  This book has a definite feel of being the end of the first story arc.  By book's end we have accomplished one of the missions set out in the first book, gather together the six Olympians (3 boys, 3 girls).  New information is imparted to the group and while some open threads continue, new goals are also added.  This leads me to believe we are in for a long running series, like Holub's other series for girls "Goddess Girls", but one which will group books together in story arcs similar to the Magic Tree House series.  If so, I'm game and in for the long run.  Highly recommend this series for libraries!
Labels: 2013 children early chapter books historical fantasy myths