274. Lost Cause by John Wilson 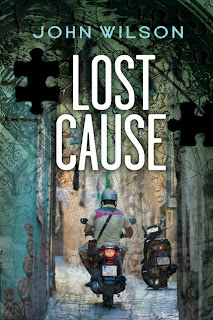 Lost Cause by John Wilson
Seven: The Series

"Steve thinks a trip to Europe is out of the question—until he hears his grandfather's will. Suddenly he's off to Spain, armed with only a letter from his grandfather that sends him to a specific address in Barcelona. There he meets a girl named Laia and finds a trunk containing some of his grandfather's possessions, including a journal he kept during the time he fought with the International Brigades in the Spanish Civil War. Steve decides to trace his grandfather's footsteps through Spain, and with Laia's help, he visits the battlefields and ruined towns that shaped his grandfather's young life, and begins to understand the power of history and the transformative nature of passion for a righteous cause."

I was interested in this series when I first heard about it.  What attracted me to it was a series of connected books where, it is proposed, the reading order does not matter.  The collection of Canadian authors contains one of my all-time favourites whom I read everything he writes, Shane Peacock.  So I would eventually at least read that one book for sure.  I'd read and enjoyed three of the other authors, have always wanted to read another one of them leaving me with only two new-to-me authors.  It sounded very promising.  I was pleased to have won this particular title as I have read and enjoyed a few of author John Wilson's books.

I was immediately engaged in the story right from the beginning.  The common set up between the books of the Grandfather giving the boys tasks to accomplish in his will is unique and had me interested.  The main character of the grandson Steve is well fleshed out and we get to know him very well throughout this book.  Wilson is mainly an historical novelist and while this is a contemporary story it is rooted in the past by means of a search into the Grandfather's past in Spain and the finding of his journal from the year 1938.  The book alternates with a present day narrative and journal entries of the young grandfather fighting in the 15th International Brigade during the Spanish Civil War ending with the final engagement at the Battle of the Ebro.  I found the story utterly compelling and engrossing.  I know virtually nothing of this war and learnt much from the personal point of view of a common soldier.  It also really made me think hard, the concept of fighting Fascism with Communism is very difficult for me to wrap my mind around; one evil fighting another.  The book has made me eager to read other books set during the Spanish Civil War should I come across them and I very much want to continue this series.  Occasional references were made to Steve's twin brother who had his own task to complete scattering their grandfather's ashes; so I think that is the book I will move onto next.  I am also very eager to see if picking and choosing the reading order will really make no difference to the enjoyment of the series.  I found this a total page-turner and it has solidified my opinion of John Wilson as a strong writer of historical fiction.
Labels: 2012 Canadian author historical fiction MG war