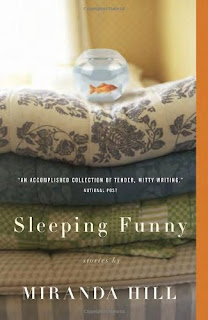 "Sleeping Funny is a rare book—a debut that introduces a mature writer in full possession of her powers, one who instantly draws you in with her sure voice, intelligence, and humour, and then keeps you reading with growing admiration and delight. Although they are united by these qualities, Miranda Hill's astonishing stories are otherwise notable for their protean variety. Rarely do we find a writer who can inhabit, with equal skill and empathy, the consciousness of a modern teenage girl trying to navigate an embarrassing Sex Ed class, a middle-aged country-village minister in the 19th century who is experiencing a devastating crisis of faith, a young pilot's widow coping with her grief by growing a "Victory Garden" during World War II, and a group of contemporary professional women living on a gentrified big-city street whose routines are thrown into disarray with the arrival of a beautiful bohemian neighbour.

Here are strikingly accomplished stories—surprising and witty tales for readers who love to be drawn in and transported from first word to last."

I had no idea who Melanie Hill was when I started to read this collection except that she is the wife of the award-winning Canadian author Lawrence Hill.  As I started reading Ms. Hill's stories I was astounded at how much I enjoyed them and I truly loved the outlook on life that they presented, though not always happy endings.  I had to stop after a few and google her to find out if she was Catholic as she read to me like a Catholic author.  Very little is available about her online but I did come across a CBC interview with her where she remarks that her work often carries the theme of miracles perhaps attributed "to being sent to Catholic school, even though my family wasn't Catholic. I was the little girl in the back pew, watching the other kids drink the wine that had been turned into blood."  These stories are wonderful and while a couple fell flat with me the others were so outstanding I was entirely satisfied with this collection and can't wait to read more from the author.  My favourite stories were "Because of Geraldine", "Apple" and "Rise: A Requiem (with parts for voice and wing".

1. The Variance - At sixty-two pages the first story in this collection could be called a novella as it reads like one with breaks for changes of view and passage of time.  I quickly settled into the community in which this is set: the upper-middle class street of lawyers' and doctors' families with their children and nannies.  Mothers who have high profile jobs but try to outdo each other with their commitments at the school to which all their children go.  Everything is peaceful and the same here until the Revivo-Smithermans move in to the old Anderson house.  They don't fit, especially Michal.  She turns her front lawn into a garden.  She has huge flyaway frizzy hair.  She wears her baby in a sling.  She is always home.  She seems to have all the time in the world.  The street at first ignores them, then feels them an irritation, until the day Michal hands out notices that she is requesting a zoning variance ... and they learn who she really is.  Personally, I related most to Michal and loved her quiet effect on the neighbourhood women.  She is a strong character, even though she remains mysterious and I was very satisfied with the ending.  Great introduction to this author!  (4/5)

2. Apple - SPOILERS.  I love this so much I just have to talk about it spoilers and all.  This is a bit of magical realism.  The Grade 8 class usually hands out (fake) electronic babies for the class to look after as part of the Family Studies class.  But they were broken this year and a new teacher took over.  She did something which made the class able to see her parents in flagrante delicto at the time that she was conceived.  Looking around the class every student was able to see this of the other students.  Outside of the class they could see this of everyone they met.  They couldn't see their own though; someone else had to tell them what they saw.  Many are embarrassed, hurt or shocked by the circumstances under which they see themselves and others were conceived.  The ability eventually goes away and is not discussed in class but it has lasting effects on the narrator who later chooses abstinence with her boyfriend, not trusting birth control as 100%, and "for our kid, I'd want something better."  Boyfriend agrees with a smile.  An "out there" story but brilliantly pro-life! (5/5)

3. Petitions to St. Chronic - A man jumps from a 24 story building and survives.  It is a miracle!  Three strangers gather to keep vigil at the hospital wanting to see him when he comes round: a Catholic man, a woman with a history of helping broken men and the narrator, an abused wife.  Wonderful!  A story of healing but not for the one you would think.  Loved the religious overtones.  (5/5)

4. 6:19 - A man's train pulls over every evening at 6:19 to let another train pass and while he watches out the window a woman gardening in her backyard, he starts to fantasize about her and her home.  The story is really much more complicated than that and more about the man's feelings about his life, marriage, job: the worthiness and purpose of it all rather than having any plot.  I just didn't like this guy and couldn't care about the story. (3/5)

5. Because of Geraldine - The eldest daughter of a couple narrates as she reflects back on her parents marriage which was always overshadowed by the father's first true love who ran away to Nashville to be a star.  Then Geraldine returns one evening to play at the local legion and everything for her parents will forever be changed.  Absolute sweet, pure perfection!!  I can't imagine any story being better than this one.  My favourite in the collection!  (5/5)

6. Precious - At 49 pages this is the second longest story in the collection so far and could be called a novella by some.  It is a completely compelling story. It is a sad story and one finds it hard to like the characters.  Alex is seven when his baby sister is born.  Alex is described as having a Picasso painted face and a twisted frame.  He receives little affection from his parents but when his undeniably beautiful sister is born he is merely tolerated as long as he doesn't interfere with the sister.  The mother obsesses and overprotects Kristi-Anne to such an extreme extent that she shares her room with her and the father is delegated to the couch, but the father is awed by his daughter and the new maternal instincts of the mother have made him fall in love with and respect her once again.  The ending is ambiguous.  It certainly is tragic for all concerned asking them realise what is truly precious in the end, but is the final event a release or tragedy for the one most concerned.  Thought provoking!   I still like "Because of Geraldine" better but this is still worthy of (5/5)

7. Digging for Thomas - Quite a short story this time.  A woman's husband is off to war, probably WWII. She notices that his things are slowly disappearing, little things like pipe and socks and she gathers more of these items together and leaves them for "them" to take.  After they receive word of his death in action, she and their little son work on a little garden which seems to represent the man's life to them.  Then one not-so-fine day a big storm comes along breaking a secret and pulling apart the planted garden.  One sees the characters learn to accept death for what it is. Only ok compared to the others. (3/5)

8. Rise: A Requiem (with parts for voice and wing) - Splendid!  Set in the late 1800's we have a Gothic story of a minister on trial, doctors using corpses for practice, grave-robbing and the Apocalypse. What a tale. Absolutely delicious!  I loved it!  (5/5)

9. Sleeping Funny - A woman returns to her small home town after fleeing from it to Vancouver to have a baby out of wedlock.  She's always made excuses not to return.  Her mother's died and now her father is so ill, she finally must return to look after him for his final time, however long that will be.  Her young daughter becomes attached to Grampa, reading him stories, but eventually he dies and now the house has been inherited by the daughter.  A story of running away from home is really one of running from oneself, and upon returning one doesn't have to deal so much with what was left behind but with who the person was when they were running and coming to terms with the problem that still exists never going away until she came back to face it.  A nice story, I enjoyed the characters very well, especially the daughter Melanie, but I did find my mind wandered through the reading.  Probably the weakest story in the collection. (2.5/5)
Labels: 2013 Canadian author pro-life short stories